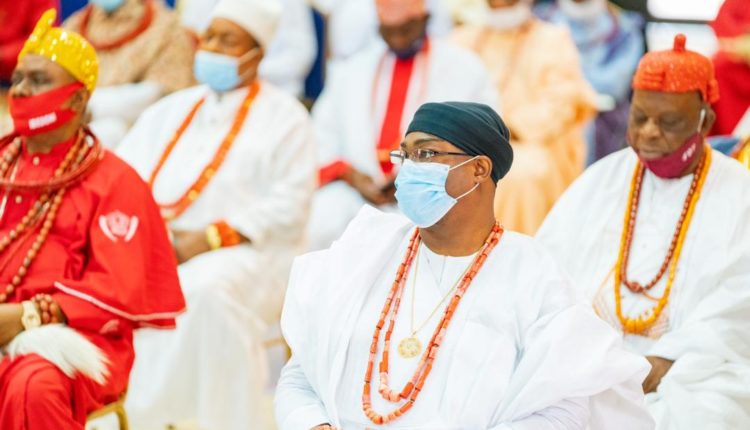 Governor Ifeanyi Okowa of Delta on Tuesday, expressed optimism that the state’s security outfit, Operation Delta Hawk, would commence operation before the 2020 Yuletide.

The governor made this known at a meeting with traditional rulers and religious leaders at the Unity Hall, Government House, Asaba, and said that necessary equipment to make the outfit operational had been procured.

He explained that the process of establishing the security outfit took a while because he wanted to ensure that everything was in place, adding that the outfit would tackle kidnapping and other violent crimes, including farmers-herders clashes.

“We set up the Operation Delta Hawk which we are hopeful will be operationalized before Christmas. The team has already been selected and trained and we have been able to get men on ground to participate.

”For them to be able to undertake such programmes, they also need the body armour, the vests which we have gotten recently.

“The Operation Delta Hawk team will work closely with vigilante groups across the wards and communities and will help to tackle issues relating to kidnapping, farmers-herders clash and violent crimes,” he said.

The governor also briefed the stakeholders on the activities that took place in the state during the #EndSARS protests and thanked traditional rulers for their role in community development.

He disclosed that a delegation comprising two traditional rulers, one religious leader, two youths and two women from the state would attend a meeting of a Presidential delegation led by the Chief of Staff to President Muhammadu Buhari with South-South people on Friday in Port Harcourt.

He recalled that issues of illegal detention, police brutality and death of youths triggered the recent protests which emanated from Ughelli and Lagos.

“A lot of other issues came up with the protest and we thank God for helping us to control the process.

“The destructions that took place in Asaba were orchestrated by people who infiltrated the state from neighbouring states and from our intelligence reports, we have them in all manner of urban centres in the state.

“Traditional rulers should help us keep vigilance to help us find out who their leaders are. There were lots of destructions in Rivers, Akwa-Ibom, Cross River, and in Edo where they even freed prisoners.

“We arrested one person carrying petrol which meant that he had the intention of burning down the Events Centre.

“One of the learning points from the protests is that there is an urgent need to re-tool the governance process,’’ he said.

Okowa stated that many youths were unemployed and unengaged, adding that in their idle nature, “they are agitated and the ENDSARS protests gave them the opportunity to vent that anger and frustration that have been bottled up over the years’’.

He appealed to leaders to brace up to their responsibilities of mentoring the youths on the way to go.

According to him, we all have our roles to play in building the youths; they have rightly drawn our attention about their challenges, particularly the issue of unemployment.

“As we begin to address these issues just as we have consistently done since five years ago, there is a need for us to work together towards ensuring that we build the youths as leaders of tomorrow.

“So, there is a huge work to be done in the country to reduce the level of poverty across the nation.

On COVID-19, the governor said that Pfizer, a multinational pharmaceutical firm, had announced that it had discovered a vaccine that could provide immunity over COVID-19, but warned that it was not time to be complacent.

“God has been good to us because the incidents of hospitalisation in the country are not high.

“The virulence of the COVID-19 virus in Nigeria and Africa has been minimal compared to what it is in Europe and America. It is not a time for us to relax but a time to wear our masks and use our sanitisers,” he stated.

In their separate remarks, the Chairman of Delta State Traditional Rulers Council and the Obi of Owa Kingdom, Dr. Emmanuel Efeizomor the second, Orodje of Okpe, Orhue the first and the Olu of Warri, Ikenwoli the first and other speakers at the meeting, said the time for restructuring was now for the good and overall development of the country, adding that Nigeria was lagging behind because we have refused to restructure the country.

They advocated for proper training of police personnel and enhanced remuneration with a view to enhancing their operational efficiency, even as they applauded governor Okowa for establishing Operation Delta Hawk.

On their part, Bishop Hycinth Ogbebor and Alhaji Umumakai Unagha ,said no effort should be spared in re-engineering and overhauling of the security architecture for positive result, just as they advocated for true federalism in the country.