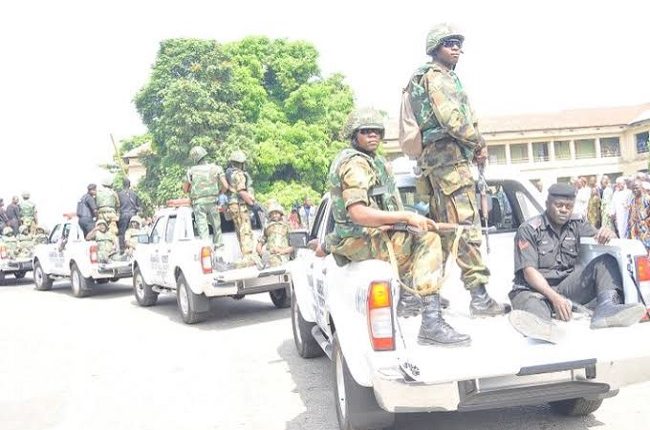 OPERATION Burst, an Oyo State special security outfit, comprising of officers of the Nigerian Army and the Nigeria Security and Civil Defence Corps (NSDC), has arrested and detained officers accused of assaulting a lady and man at the Beere area of Ibadan, the Oyo State capital over the weekend.

A top official of the outfit, who upon sighting the video in which the officers were seen maltreating the civilians traced the affected persons to their houses to apologise to them personally, while speaking over the incident on Monday, pleaded with them as well as their family members stating that the security outfit would not in any way tolerate acts of indiscipline from its men, stating the action of the officers is highly regretted.

He noted that the personnel were deployed to Beere to provide adequate security for lives and properties due to civil unrest being recorded as a result of the #EndSARS protests.

The highly ranked officer, who could not hide his rage over what it described as an ugly incident hinted that the authority of the security outfit upon information about the viral video where the officers were seen harassing a lady and a man ordered their immediate arrest and detention on Sunday night, adding that severe sanctions would be adequately taken against them.

He, therefore, urged the people of the area as well as other residents in the state to go about their normal businesses with a pledge that operation Burst remains committed to its mandate of protecting the good people of the state as well as their properties.

It was, however, gathered that the state government has ordered that the officers involved in the dastardly act be immediately dismissed from the security outfit. It also demanded that the military authority carry out a proper investigation and the erring soldiers be sanctioned accordingly.

One injured, others scampered for safety as crisis engulfs Mobil ringroad makeshift…

‘Accountancy a tool for national development, good governance in Nigeria’