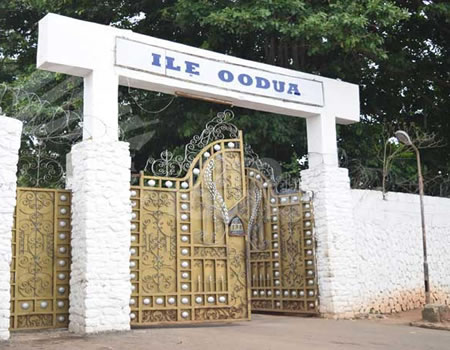 THE Oluwo of Iwo, Oba Abdulrasheed Akanbi is currently in a closed-door meeting with the Ooni of Ife, Oba Adeyeye Enitan Ogunwusi (Ojaja II) at the palace of the latter, located within the precinct of Ile Oduduwa, Ile-Ife, Nigerian Tribune authoritatively gathered

Though details of the parley and the actual motive behind it were still sketchy as of the time of filing this report, our correspondent learnt that it might not be unconnected with the need to foster a healthy relationship between the two traditional rulers.

The relationship between the monarchs have been far from cordial over the time, with the recent controversy generated by the allegation raised by Oluwo, accusing one of the security aides of the Ooni of shoving him aside during a conference of nation’s topmost traditional rulers held at Portharcout, Rivers State earlier in the year.

However, an impeccable source informed the Nigerian Tribune that the ongoing parley aimed at brokering a truce among the duo was midwifed by the Alayemore Olojudo of Ido-Osun, Oba Aderemi Adedapo and the Orangun of Ila Orangun, Oba Wahab Kayode Adedeji Oyedotun.

Man in court over alleged theft of children’s clothes