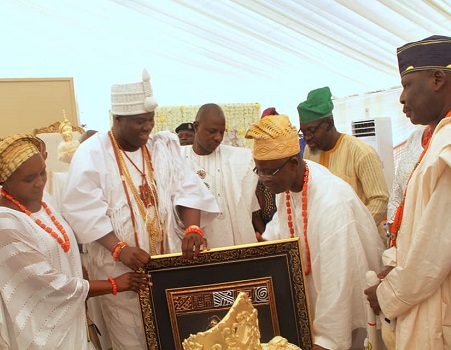 THE Ooni of Ife, Oba Adeyeye Ogunwusi and the Olubadan of Ibadanland, Oba Saliu Adetunji, have inaugurated the Yoruba art gallery of Ilaji Hotels and Sports Resort, Ibadan.

The ceremonial opening of the gallery, last Thursday, was also used by associates and well-wishers to celebrate both Oba Ogunwusi and the resort’s proprietor, Chief Dotun Sanusi, on their birthday.

Oba Ogunwusi commended Chief Sanusi for his efforts at ensuring the preservation of the cultural heritage of the Yoruba and then pronounced him as the Okanlomo of Yorubaland.

The Olubadan, Oba Adetunji, who arrived at the resort after the departure of the Ooni to equally launch the Ilaji art gallery and celebrate with Sanusi, praised the philanthropist for upholding Yoruba culture and tradition and gave him the royal blessing.

The traditional ruler, who was accompanied by his wife, Olori Rasheedat and his media assistant, Mr Adeola Oloko, was received into the venue by the Aseyin of Iseyin, Oba Abdul Ganiyy Salaudeen; the Eleruwa of Eruwa, Oba Samuel Adegbola; the Alakanran of Akanran, Oba James Obisesan; the president-general of the Central Council of Ibadan Indigenes (CCII), Chief Yemi Soladoye and other dignitaries.

Other notable personalities at the event were members of the Oyo State House of Assembly led by the Speaker, Honourable Adebo Ogundoyin; the Olugbon of Ile Igbon, Oba Olusola Alao; football legend, Nwankwo Kanu and captains of industry.

The ceremony also marked the beginning of Ona-Ara Arts and Cultural Festival, a three-day event organised to mark the 50th anniversary of the Agbekoya revolt.

Shi’ites give condition for dialogue with government

Fayose’s trial: We solicited patronage but evidence based on what I was told, EFCC’s witness tells court