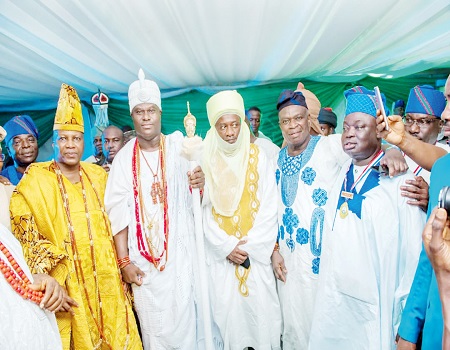 Other recipients of the honour were His Imperial Majesty, the Emir of Ilorin, Alhaji Ibrahim Sulu Gambari, OFR. and Akogun Tunde Afolabi, the Chancellor, Technical University, Oyo State.

At the investiture ceremony held on Friday, the President of the Club Olumakinde Oni, in a chat with our correspondence on the occasion, declared that Ibadan Recreation Club is a cosmopolitan entity, first in Africa, with people of integrity from all spheres of life as members, he added that no one could hold any position in the club without being thoroughly scrutinized and found worthy of good character whose society has affirmed benevolence.

He said the installation of the new Trustees and Patrons for the club became necessary to fortify and also invigorate the club with eminent Nigerians, irrespective of their tribes, gender and religion, to boost its social responsibilities in the society.

He said: “ Ibadan Recreation Club started as a European Club formed by 25 people in 1902, all white. The name was changed to what it bears now when Nigerians took over the management of the club though still maintained its focus and standard till date The motto of the club is love, harmony, physical excellence through recreation upon which the club

”The club has impacted many lives in the society in the areas of education, sports and economic empowerment. As a matter of facts, the club is a meeting point for who is who in Nigeria, covering all professions in life We organize annual lecture relating to the development of Nigerian economy and progress of individual businesses. We come together not only to promote recreation, but also to mould life and foster unity. We are glad to receive the new patrons and Trustees into the club. Their wealth of experiences will add value to the club in terms of growth, development and its social responsibility to the country at large,”.

The President of the club, an Agro Investment Consultants, while enjoined the new awardees in the club to live up to the club’s expectation, contributing more to the progress of the club and the country at large, appealed to the Nigerian government to divert more fund to the development of agro-business venture in the country.

Ooni urges children to prepare for prosperous future through hardwork