Ooni calls for investment in girl-child to attain sustainable development

Entertainment
By Tribune Online On Oct 14, 2019 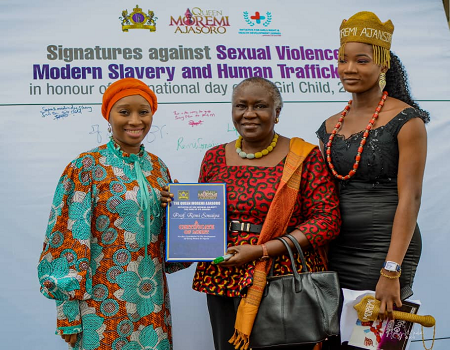 The Ooni of Ife, Oba Adeyeye Ogunwusi, on Sunday, called on both the public and private sectors to invest in the girl-child for sustainable development in the country.

The royal father made the call while speaking with the News Agency of Nigeria (NAN) at the ongoing maiden campaign by Queen Moremi Ajasoro (QMA) against slavery and trafficking of the girl-child in Lagos.

NAN reports that the campaign was flagged off as part of the activities commemorating the 2019 International Day of the Girl Child.

According to the monarch, though girls are regarded as the weaker sex, they should be given the utmost recognition.

He said that if the girl child was neglected in society, it might result in the destruction of the entire nation.

“If we don’t invest in the girl-child, we are not investing in our nation, because we will just be deceiving ourselves; it means that we have neglected our duties and responsibilities,” he said.

Speaking on the education of the girl-child, he said that there should be more opportunities for her to go to school, adding “when you educate a girl child, you educate a whole nation.

“It’s all about society because we have very limited education for the girl-child and this is not good.

“We should focus more on them because they are the engine room of the society but unfortunately, society seems to have let them down.

“The family values have been lost; even some parents force their girls into early marriage, because no adequate education for them to know their rights,” he said.

Oba Ogunwusi further urged the government to invest in the education of the girl-child, adding that there should be no compromise.

He also noted that foreign culture and lifestyle had taken over most young girls, adding that this was why the Queen Moremi Ajasoro cultural pageant was organised to awaken tradition in them.

“Parents should take a leaf from our diversified culture in the upbringing of the girl-child as the custodian of family values,” the traditional ruler said.

He urged non-governmental organisations (NGOs) in the country to start advocacy programmes like the maiden Moremi Campaign against Modern Slavery and Trafficking, which was flagged off on Oct. 11.

“The nationwide awareness campaign like the Moremi Awareness Campaign against Modern Slavery that we just started will seek to rescue victims of trafficking.

“We are set to educate those victims because they really have no idea of what they are getting into. While they are promised greener pastures, they don’t know the risks involved.

Also speaking with NAN, Prof. Remi Sonaiya, advised girls to be one another’s keeper and also be vigilant.

“Girls should be conscious of their environment and report any suspicion they notice against their gender.

“We should educate our girls on the activities of NAPTIP, being the one-stop agency on issues of modern slavery and trafficking,” she said.

Sonaiya also recommended that QMA should initiate taekwondo training for school girls as a defence tool against any form of abuse.

NAN reports that the QMA initiative launched its campaign against modern slavery and human trafficking, with over 200 school girls drawn from six secondary schools in Ile-Ife, Osun.

The campaign was graced by Prof. Remi Sonaiya, a female presidential aspirant in the 2015 general elections and Mrs Aduke Obelawo, a social development expert.

The facilitator, Princess Ronke Ademiluyi, in company with the current Queen Moremi Ajasoro 2018, Toluhi Adedamola, told NAN that the campaign would be moved across the country for effective result.

Landlord, 57, in court for allegedly defrauding tenant of N1.5m