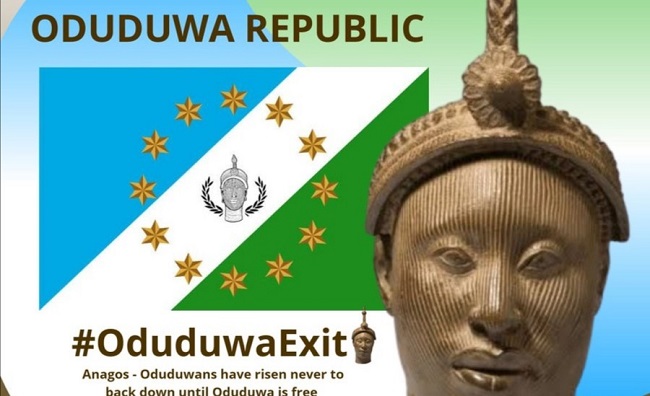 Osun State government has dissociated the state from a seditious group going round some public schools across the state disseminating a secession message of the Yoruba nation to students in the schools.

This is just as the state government through the Ministry of Education has suspended the Principals of the three schools who allowed the seditious group into their school premises to speak with the students.

Reacting to a viral video that showed the group talking to the students about the plan of the Yoruba nation to secede from Nigeria, Commissioner for Education, Hon. Folorunsho Bamisayemi said the administration of Governor Adegboyega Oyetola was not aware and never gave consent to the group to speak with public school students in the state.

Bamisayemi who emphasized that the administration of Governor Oyetola frowns at any move to disunite the country maintained that the state had never at any point in time associated with such group on what he described as a move that is capable of hindering the unity of the country.

He said, “Nigeria is one entity and will continue to remain so. The state government of Osun never gave consent to any group to speak with students of public schools on a matter we know can cause disunity and chaos in the country.

“As a Nigerian state, we believe in the Nigerian dream. We urge every Nigerian to pray and work that Nigeria should not break up. As for those principals that allowed such group into the premises of our schools, be ready to face the consequences of their actions.

Also reacting, the Special Adviser to Governor Oyetola on Education, Hon. Jamiu Olawumi said it is unfortunate that some unscrupulous elements are going about polluting the minds of young children because they know that they are still naive.

While warning such seditious groups to henceforth stay away from the State of Osun, the Special Adviser to the Governor said students of secondary schools in the state and across the country will continue to be a symbol of Nigeria’s unity at all times.

In spite of the huge investment in the water sector by the government and international organisations, water scarcity has grown to become a perennial nightmare for residents of Abeokuta, the Ogun State capital. This report x-rays the lives and experiences of residents in getting clean, potable and affordable water amidst the surge of COVID-19 cases in the state…Osun dissociates state  Osun dissociates state

The Lagos-Ibadan railway was inaugurated recently for a full paid operation by the Nigerian Railway Corporation after about a year of free test-run. Our reporter joined the train to and fro Lagos from Ibadan and tells his experience in this report…Osun dissociates state  Osun dissociates state