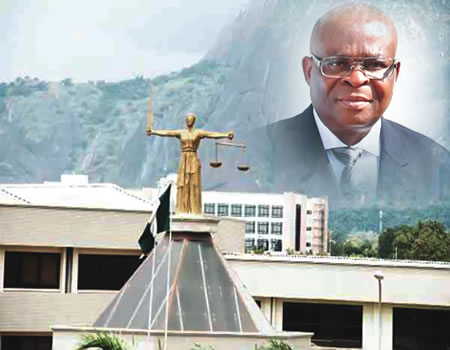 Share
The Supreme Court in a split decision of six to one dismissed the suit filed by the Cross River state government challenging the suspension and trial of former Chief Justice of Nigeria (CJN), Justice Walter Onnoghen for being incompetent.
In a dissenting judgment, Justice Mary Peter-Odili granted all the reliefs sought by the plaintiff after holding that it has the locus standi to institute the legal action.
Justice Odilli who dismissed the preliminary objection filed by the Federal government held that it was proper for the plaintiff to bring the action having been clothed with locus standi.
In her dissenting judgment, Justice Odilli held that the Code of Conduct Tribunal (CCT) lacked the jurisdiction to adjudicate on the criminal charge against Onnoghen, adding that, as a judicial officer, the matter ought to have been handled by the National Judicial Council (NJC) first as in Nganjiwa Vs Federal Republic of Nigeria (2017).
Cross River State had in a suit marked SC/145/2019 filed by its Attorney General challenged the suspension and trial of Justice Onnoghen at the CCT and equally asked the apex court to quash the charge against Onnoghen, who is an indigene of the state.
But in a majority judgment, six out of the seven justices of the court on the panel, held that the plaintiff lacked the requisite locus standi to institute the suit.
Other Justices of the Supreme Court who agreed with the majority judgment delivered by Justice Paul Galilje were Justice Olabode Rodes Vivour; Musa Daitijo Mohammed; Kudirat Kekere- Ekun; John Inyang Okoro and Justice Sidi Bage.

At the last adjourned date when the case came up, counsel for the plaintiff, Locius Nwosu (SAN)  had, while adopting his brief of argument urged the court to grant the reliefs sought by the state.
On his part,  counsel to the defendants and the Solicitor-General of the Federation, Dayo Akpata argued his notice of preliminary objection in urging the court to dismiss the suit on the ground that the plaintiff lacked the locus standi to institute the action.
In a notice of preliminary objections filed by Attorney General of the Federation and Minister of Justice, Abubakar Malami (SAN), the Federal government challenged the jurisdiction of the court to entertain the matter on the grounds that there is ‎no dispute between the defendants in this suit and the plaintiff as envisaged under section 232(1) of the 1999 constitution (as amended).
It is also the contention of the Federal government that, “the subject matter of this suit is personal to Justice Onnoghen Walter Samuel and does not in any way affects the Cross River state government as to confer it with the locus to institute this suit.
“The reliefs and claims made herein by the plaintiff are not for the benefit of Cross River State but personal to Justice Onnoghen”.
Besides, Akpata informed the apex court that the subject matter of the suit is  already before the Court of Appeal which has reserved judgment, adding that the action of the Cross River State amounted to ” forum shopping and an abuse of court process.”
The plaintiff counsel, Locius Nwosu insisted that the case of his client is different from the appeal filed by Justice Onnoghen at the Court of Appeal, saying that, “My lords, the suit is not about Justice Onnoghen but about the interpretation of the constitution.
” It is for the interpretation of the provisions of the 1999 constitution, particularly sections 4,5,6, 153(1), 158(1), Paragraph 21(b) of Part 1 of the Third Schedule of the 1999 constitution (as amended), the purported filling of the charge in charge No. CCT/ABJ/01/19 between FGN vs Hon. Justice Onnoghen Nkanu Walter Samuel before the Code of Conduct Tribunal, against a Judicial officer who, in this case is the CJN, without any formal complaint having been made against him to the NJC, robbed the tribunal of jurisdiction to try the charge, and all the proceedings relating thereto are null and void, a nullity.
In the originating summons, the plaintiff  posed four questions for the determination of the Supreme Court and an order setting aside the charge and proceedings in charge No. CCT/ABJ/01/19 between FGN Vs Justice Hon. Onnoghen Nkanu Walter Samuel.

ALSO READ: NAFDAC to clamp down on drug hawkers in FCT ― Official

An order of injunction restraining the defendants by themselves, their agents or privies from further initiating or proceeding with any similar charge or charges as in charge No. CCT/ABJ/01/19 between FGN Vs Justice Onnoghen Nkanu Walter Samuel, CJN and or any judicial officer of the superior court created by the Constitution in Nigeria until a formal report of misconduct is first made to and investigated by the National Judicial Council.
The originating summons is supported by 11 paragraph affidavit deposed to by Ibi Mboto, a legal practitioner of Ministry of Justice, Calabar.
He deposed to the fact that “Honourable Onnoghen Nkanu Walter Samuel the current Chief Justice of Nigeria is an indigene of Cross- River State and therefore the highest judicial officer from the state.
“That I know that since January 14, 2019, it has been within the public domain that the Executive arm of government through the office of the Attorney General of the Federation framed a charge against the Hon. Justice Onnoghen Nkanu Walter Samuel, the Chief Justice of Nigeria for a breach of the Code of Conduct on declaration of assets without reference to the NJC.
“That I know that by the charge ‎the defendants have breached the Constitution as it relates to the separation of powers by seeking to discipline judicial officer without complying with due process of channelling whatever allegation to the NJC.
courtCross-RiverOnnoghen
Share

​Yewa will not be marginalised during my tenure ― Dapo Abiodun