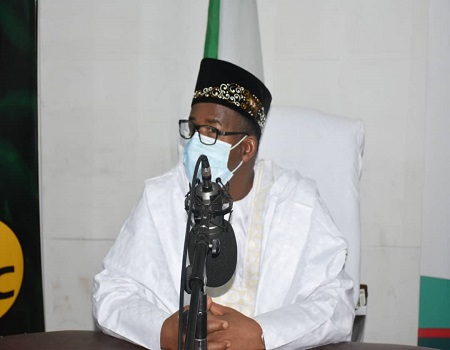 As the PDP led administration in Bauchi state clocks one year in office on Friday, it lambasted the state chapter of the opposition APC over its Orchestrated Propaganda aimed at rubbishing the landmark achievements so far recorded by Governor Bala Mohammed led government.

The APC had in a press briefing berated the PDP led government saying that the party has no agenda for the good governance of state declaring that it cannot pinpoint to any tangible achievement recorded within its one year in office.

But the PDP responded that as far as it is concerned, the APC is dead in Bauchi but struggling for survival and so is reading some people’s script with no facts to support the allegations raised against it.

He added that “We are not miffed by the several allegations the APC are throwing about, to raise false impressions about the Government in the minds of the people of the state. They talked about the source of how we pay salaries of the state and anybody who is conscious of the economic realities in the state will not question the source of the earnings of a state. At least we are paying salaries and the civil servants will attest to that”

Hamza Koshe Akuyam added that “Concerning the projects in the state that they are alleging that due process was not followed in their execution, they should know that within one year, we executed projects that everyone can see, including them. These were projects they were struggling to complete during their wasted four years in office and they could not achieve anything”

The PDP Chairman further said that “If they choose to remain docile, we hope they continue to remain docile and go dead within our first four years in office because if you want to make allegations, you should come out with concrete evidence. They alleged that we mismanage the COVID 19 palliatives given to the state, but everybody is a witness of how we briefed stakeholders of the state from the day we had the first index case to the over 200 index case of our achievements, so they have no facts”

The Chairman said that the APC should do some introspection and soul searching instead of its current laughable resort to lies and guile to justify its disastrous failure in its four years administration in the state, adding that APC will come begging because Bauchi has always been a PDP state.

The APC through the Chairman of its Media/Publicity Committee, Comrade Sabo Muhammad described the one year of the PDP administration in the state as a waste, insisting that the situation Bauchi state has found itself is worrisome and most unfortunate in the history of the state.

Sabo Mohammed also reacted to the position of Engr Joshua Sanga, Chairman of the State Budget Monitoring and Public Procurement Agency on the one-year scorecard of the PDP led Government, who stated that the administration of Governor Bala Mohammed awarded over 70 different projects through due process and issued certificates of no objection.

He described the 70 claimed projects worth over N45 billion in 365 days as “white lies” saying that all the due processes of projects were not followed such as the list of companies that submitted tenders for projects, unit cost, location of project and type of service rendered before the award of contract.

He alleged that “In 2019, the Peoples Democratic Party while campaigning had mischievously claimed to have the temerity and dexterity of delivering better services to the state including an opening window of bountiful employment opportunities to youths and women as well as improve the security of lives and property if elected”

Sabo Mohammed added that “The applied trick can rightly be said to have worked over the intelligence of electorates. Ironically, it is just one year in office and we are all living witnesses to the policy thrusts on implementation by the PDP led Government which is at variance with what it promised during the campaign. Instead of employment opportunities, the youths are pauperized and frustrated. The vocal ones among them are threatened with arrest and intimidation”.

On the management of the Coronavirus pandemic in the state, Comrade Sabo said that Coronavirus situation was given a political colouration laced with the deceit of prompt action while the situation worsened, pointing out that the people of the state were given draconian laws under the guise of fighting COVID-19, which has affected the legitimate sources of livelihood and palliative were denied the people.

One year in office: We are making steady progress to move forward, Gov Yahaya declares