One year in office: Bauchi govt pledges better days ahead 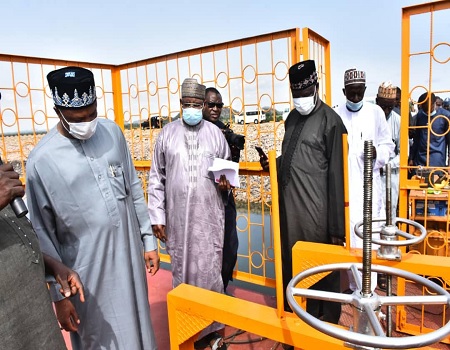 As his administration clocks one year in office, Governor Bala Mohammed has promised the people of Bauchi State of better days ahead post COVID-19 pandemic.

Tribune Online reports that the governor gave the assurance through the State Commissioner of Information and Communication, Garba Dahiru who led journalists on a three-day inspection of completed and ongoing projects across the state. The tour is in preparation for the one year anniversary.

Addressing journalists at one of the completed road projects sites in the state capital on Tuesday, Dahiru said that one year was enough to assess the performance of any serious government.

The commissioner said that: “You are all aware that the Government of His Excellency, Sen Bala Abdulkadir Mohammed, will soon be one year old in office and it is a practice and we felt it is very important to invite the media family to come and inspect and see for what has actually been happening in order to compare and contrast what the governor has done for his people.”

According to Dahiru, Governor Mohammed has demonstrated that he is a true servant of his people by carrying out numerous developmental projects within such a short period of time.

On his part, the Permanent Secretary, Ministry of Works and Transport, Engineer Stephen Abubakar who took journalists round the 1.75 kilometres Yakubun Bauchi-Raji quarters road, said that the road has been completed 100 percent with adequate water drainages.

He further said that the road has opened up communities that hitherto lacked road infrastructure and were locked out from other neighbouring areas, adding that it has now boosted the day-to-day businesses of people of the area.

He added that the road serves the community and links it with the 4.2 kilometres bypass road that is been constructed from Gombe road to Maiduguri road.

He said the other road that is in the same contract is that of Muda Lawal market which is 1.1 kilometres, adding that the three roads totalling over 7 kilometres was awarded at the sum of N2.5bilion to Triacta Nigeria limited.

Engineer Abubakar said two of the roads have been completed 100 percent and are being put to use while others are ongoing.