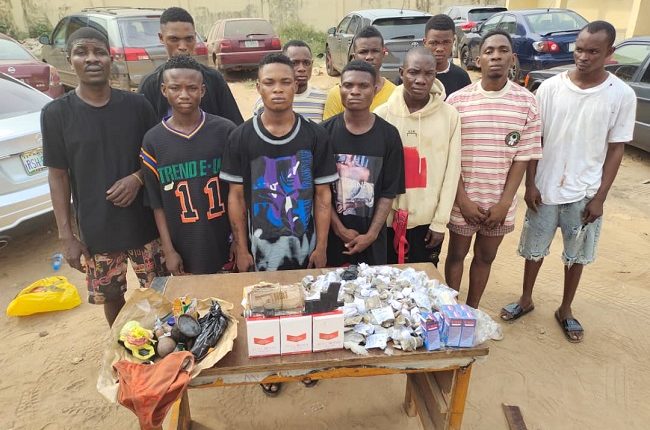 In what appears a major breakthrough in crime-fighting, operatives of the Delta Police Command have arrested a murder suspect and 20 cult suspects separately in the state.

This was disclosed in a statement made available to journalists in Warri by the Police Public Relations Officer (PPRO), DSP Bright Edafe on Friday.

He said one Twere Shipiode ‘m’ aged 29yrs, was arrested for allegedly stabbing to death one Paul Ogilo ‘m’ age 26years, after a brawl at Otu-jeremi community in Ughelli South Local Government Area of the state on January 12.

He said the lifeless body of the deceased was seen in a pool of his own blood and the house deserted when police operatives from Otu-Jeremi visited the scene.

“Upon an intelligence-led investigation, the suspect was trailed to an uncompleted building in Otu-Jeremi where he was seen with a kitchen knife suspected to have been used in committing the crime and he was immediately arrested.

“Upon interrogation, the suspect admitted committing the dastardly act.

“He further stated that a fight ensued between him and the deceased after the deceased found him in his house and that the deceased accused him of attempting to defile his daughter.

“He stated that during the fight, he used the kitchen knife to stab the suspect on the neck,” Edafe stated, adding that the suspect is in police custody for further investigation.

Meanwhile, a raid of some black spots at Ogharefe, in Oghara, Ethiope West Local Government Area of the state on January 12 at about 2:00 a.m by police operatives led to the arrest of 20 cult suspects.

A fabricated wooden gun, 648 wraps of weed suspected to be Indian hemp, one used female pant, various charms, one Knife, 16 bottles of codeine, 10 packs of rizlers, one grinder used in grinding weeds and N69,000 were allegedly recovered from the hoodlums.

While the Delta Police Commissioner, CP Ari Muhammed Ali, mandated all Area Commanders, DPOs and Tactical Commanders to sustain the tempo raiding black spots within their area of responsibilities, he urged “parents and guardians to caution their wards to desist from buying, selling or taking hard drugs as whoever is caught will be arrested and prosecuted.”

Zamfara: Marafa’s APC faction warns against use of insecurity, religion for political blackmail