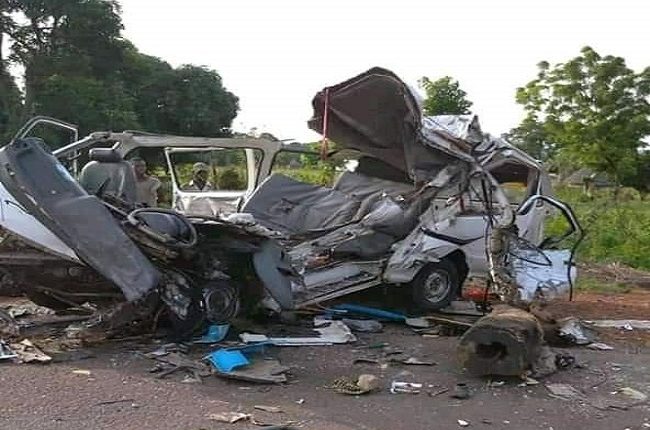 One person has been confirmed dead while two others were seriously injured on Friday as two vehicles were involved in an accident along Lokoja- Ajaokuta road.

Our reporter reliably gathered that the accident occurred at about 8.45 am on Friday as a Toyota Corolla car heading from Lokoja to Ajaokuta involved in a headlong collision with a Black Jeep.

According to an eyewitness account, other oncoming vehicles in high speed heading to Lokoja axis overtook in a dangerous manner which resulted in the accident.

The driver of the Toyota Corolla car, a contractor with Ajaokuta Iron and Steel company, Engr. Chima Ndu was killed on the spot while other occupants in the Jeep were rushed to the Specialist hospital in Lokoja.

According to a source, Engr. Chima Ndu was on his way from Lokoja where he had gone to drop his wife only to involved in an accident on his way back to Ajaokuta.

However, the Kogi State deputy governor, Chief Edward Onoja who was on his way to Omala for burial with his convoy stopped to attend to the victims as he provided vehicles to convey the victims to the hospital for medical care.

Going For 2023 Without Restructuring Will Spell Doom For Nigeria, Yoruba Leaders Warn

Yoruba Summit Group (YSG), comprising Yoruba leaders drawn from different spheres of life, on Thursday said there was an urgent need to restructure the country now, warning that any attempt to go ahead with elections in 2023 without addressing the issue would spell doom for Nigeria… Read Full Story

Falana opens up on secret meeting with Funtua over Sowore

A leading rights advocate and Senior Advocate of Nigeria (SAN), Mr Femi Falana, on Thursday opened up on the secret meeting he had with the late Isa Funtua during the detention of media personality, Omoyele Sowore, by the Department of State Service (DSS)… Read Full Story