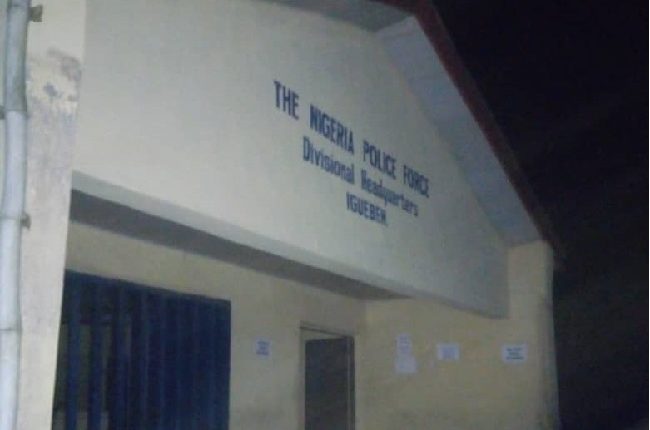 Armed men on Monday night attacked the Divisional Police Headquarters at Igieben, Edo State, carting away a large number of arms and ammunition and injuring two policemen in the process.

The two police officers, one Inspector of Police and a Corporal, who were badly injured during the attack, were said to be receiving treatment in an undisclosed hospital.

Tribune Online gathered that the suspected armed robbers came to the Igueben police station around 8.00 p.m and threw an object, believed to be a locally made dynamite into the station before gaining access.

With the explosion rocking the building, the armed men, immediately they gained access to the building, headed for the armoury where the arms and ammunition were stolen.

Initial reports indicated that the two police officers died in the attack and their bodies deposited in the mortuary, however, Edo State Police Command Public Relations Officer, PPRO, Chidi Nwabuzor, countered that, saying the officers were only wounded but not dead.

The attack, it was further gathered, had sparked serious protest in the locality as hundreds of youths had taken to the streets, calling on the government to probe the attack, which they believed was carried out by outsiders.

Reacting to the attack, the Edo PPRO said that “On November 9, 2020, at about 19.30hrs, hoodlums suspected to be armed robber invaded the Igueben police station. Immediately, the Police personnel mobilised to repel them”.

“During a gun duel, one of the suspected armed robbers was shot dead, two policemen were wounded and they were taken to the hospital. One motorcycle, suspected to belong to the robbers was confiscated by the police. No police officer was killed in the attack” the Edo Police spokesman added.

He assured that the police were doing their best to weed out criminal elements in that axis of the state capital, adding that normalcy had returned to that part of the state.

We are not a rubber stamp House, says Edo lawmaker