One feared dead, many injured as Police, Shi’ites clash in Abuja 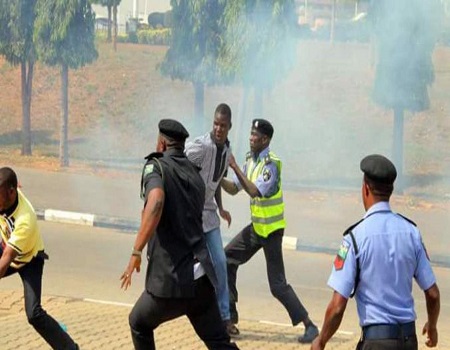 One person has been confirmed dead, while many others were said to have been injured in another clash between members of the Islamic Movement of Nigeria (IMN) popularly known as Shi’ites and Police in Abuja.

Tribune Online investigation revealed that the victim was a passerby who was allegedly hit by a stray bullet when the police fired gunshots and tear gas canisters to disperse Shi’ites who were protesting around Berger area of Wuse in Abuja.

It was further learnt that the procession, which commenced at Utako ended abruptly at Berger area due to the pandemonium.

Witnesses further told Tribune Online that other passersby ran for their dear life immediately the incident happened, while the lifeless body was said to have been moved away by the police.

It will be recalled that Shi’ites have been demanding for the immediate release of their leader, Sheikh Ibrahim El-Zakzaky and his wife, Zeenat, who have been incarcerated since December 2015.

In its reaction, however, through a statement by the Police Public Relations Officer (PPRO), Anjuguri Manzah, a Deputy Superintendent of Office (DSP), the FCT Command confirmed the death of an injured person during the incident.

According to the statement: “The FCT Police Command has successfully restored calm around Berger round-about after a violent protest by members of the proscribed El-Zakzaky IMN who went berserk on Tuesday 21, January 2020 and were attacking innocent citizens and police operatives with dangerous weapons.

“As a result of the unfortunate incident, one person who sustained an injury and was rushed to the hospital for medical attention has been certified dead by medical doctors on duty.

“The Commissioner of Police, FCT, CP Bala Ciroma has ordered a full-scale investigation into the unfortunate incident.” The statement authorised by DSP Manzah explained.