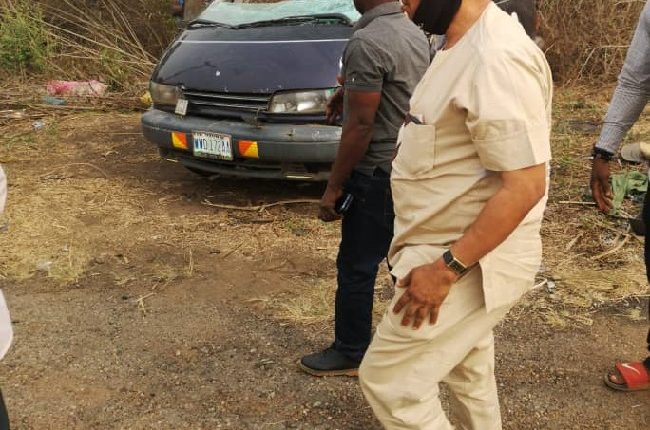 At least, one person reportedly lost his life while four others sustained various degrees of injuries in a ghastly lone motor accident that occurred along Gbongan-Ibadan expressway road in Osun State, on Monday.

The accident involved a navy blue Toyota Sienna car with registration number, WWD 172 AA, whose driver lost control while on top speed and somersaulted several times before landing in a bush on the roadside.

The Commander, Federal Road Safety Corps (FRSC), Osun Sector Command, Kudirat Ibrahim, made this known in a statement signed and made available by the Command’s spokesperson, Mrs Agnes Ogungbemi in Osogbo.

According to her, the accident which occurred at about 9:30 am of the day, involved 11 persons, six of whom were males, four females, and one female child, and that the incident was caused by over speeding and non-compliance with road traffic regulations by the road user.

She however hinted that the remains of the deceased had been deposited at the Obafemi Awolowo University Teaching Hospital (OAUTH), Ile-ife while the other injured persons are currently being attended to medically in the same hospital.

The last time Nigeria recorded such a low figure was in the December 27 to January 2 week, when it reported 5,681 cases…One dead, four injured in Osun road accident

The Federal Government is owing the university workers, under the National Association of Academic Technologists (NAAT), the Senior Staff Association of Nigerian Universities (SSANU) and the Non-Academic Union of Universities and Associated Institutions (NASU), over N150 billion earned allowances…One dead, four injured in Osun road accident

FG engages 79 to monitor homegrown feeding, N-power, others in Oyo