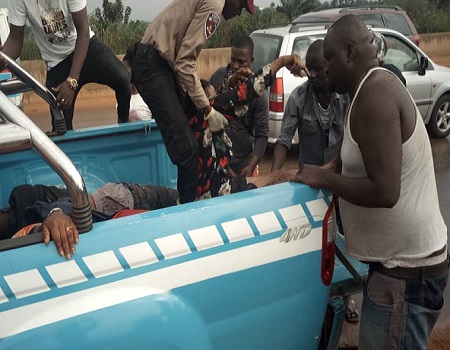 THE Anambra State Command of the Federal Road Safety Corps (FRSC) on Monday confirmed that one person died in an accident involving an 18-seater bus and a tipper on Nteje-Awka Expressway, in Oyi area of Anambra.

The Sector Commander, Mr Andrew Kumapayi, told the News Agency of Nigeria (NAN) in Awka, that 17 persons were injured in the accident which occurred at about 9.30 a.m.

Kumapayi explained that the driver of the Mercedes-Benz 911 red colour tipper, with no number plate, lost control when its tyre pulled off and collided with an ash colour Toyota Bus with Registration number AJL347XA.

He said that 21 people were involved in the accident but that one person died, one other in critical condition, while 16 others sustained various degrees of injuries.

“Our rescue team arrived at the scene four minutes after we were contacted.

“A total of 21 passengers were inside the bus, seven females, 13 males and a child. One male died, another in critical condition, while 16 others sustained various degrees of injuries.

“The corpse of the victim has been deposited at the mortuary in a General Hospital in the area, while other injured persons are receiving treatment in a private hospital,” he said.

The sector commander advised motorists to drive cautiously and ensure that their vehicles were in good condition before embarking on trips to avoid unnecessary loss of lives.

He said they were making efforts to clear the obstructions caused by the incident.