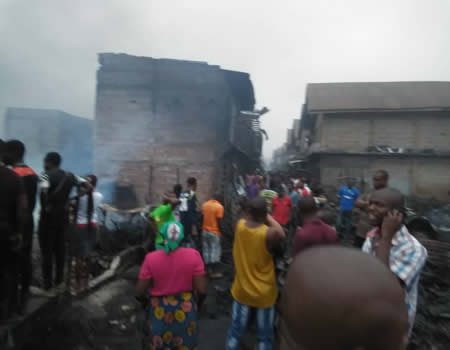 A yet to be identified person has reportedly collapsed, as early morning fire razed down shops, goods worth millions of naira at the old automobile spare parts market Awada, Onitsha, Anambra State, on Saturday.

The fire was said to have destroyed good worth millions, as some of the affected traders were said to have just bought their goods a day before of the inferno.

The Police Public Relations Officer PPRO, of the State Police Command, SP Mohammed Haruna, who disclosed the incident in a statement, said, “at about 01:30:am, on Saturday, there was a fire outbreak at old Automobiles spare parts Market Awada.”

He said following the distress call from the scene, Police patrol team led by DPO Awada Division, CSP Tony Adeyi rushed to the scene and alerted the fire service department and other emergency units that also responded promptly and put off the fire.

“Meanwhile, the Area was cordoned off by the Police to prevent hoodlums from taking advantage of the situation to loot.

“One person whose identity is yet unknown collapsed and was taken to the hospital for medical attention. Cause of the fire and value of property destroyed are yet to be ascertained.

Consequently, the Commissioner of Police CP John Abang, has sympathized with the victims of the inferno and ordered for a discreet investigation to ascertain circumstances surrounding the incident.