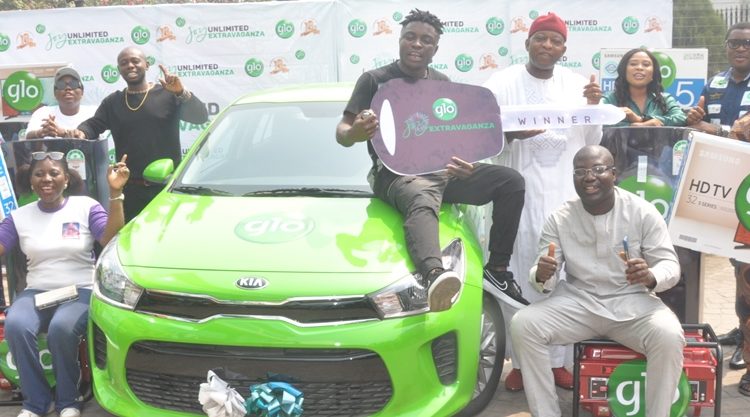 Share
Globacom’s customer reward-promo, Joy Unlimited Extravaganza, ended on  Thursday as 74 new winners received prizes in Lagos.
They included a brand new Kia Rio saloon car won by a Lagos-based cab-hailing driver, Japhet Egbede, who declared that Globacom had empowered him as he now has a brand new car for his cab business and would no longer need to rent and pay for a car to use on weekly basis. “I am grateful to Globacom, the caring network, taking care of Nigerians”, he said.
The final presentation event was held at the Gloworld outlet at Adeola Odeku, Victoria Island, Lagos where 73 others went home with household appliances including television sets, refrigerators and power generators.
Globacom’s Regional Sales Manager, Lagos, Olumide Oguntimehin, said at the presentation that the company was elated to see that subscribers had kept faith with it. “From Lagos to Enugu, Port Harcourt to Kaduna, Abuja to Jos, Benin to Warri, Ibadan to Ilorin, and Onitsha to other cities, we held prize-presentation ceremonies to hand over the items won to the winners and put smiles on the faces of our subscribers and their families”, he said while  congratulating the winners. “We  urge them to continue to make use of their Glo lines for endless opportunities”, he added.
Twenty three television sets, 25 refrigerators and 23 generators went  to winners who all expressed appreciation to the telecommunications giant for the reward promo.
The grand finale was graced by popular thespian, Yemi Solade, comedian Godwin Komone a.k.a Gordons as well as Uche Nwaefuna, another  Nollywood actor. Others were musician and entertainer, Teni Apata aka Teni Makanaki, Glo business partner and Managing Director of Mishab Ideals Limited, Mrs. Betsy Iheabunike, of the Nigerian Television Authority; Council Leader, Eti-osa LCDA, Mr Suleiman Owolabi, and Kaosara Olaleye of Iru-Victoria Island LCDA.
Taiwo Kekereowo,  a commercial officer with the Nigeria Airspace Management Agency (NAMA) who won a refrigerator said, “A big thank you to Globacom.This is the first time I am winning a prize in a promo. More blessings to the ever-giving network”.
In the same vein, a television winner, Maria Abidakun, a cleric with Celestial Church of Christ in Ikorodu who promised to donate it to the children’s section of the church said, “God bless Globacom, they will continue to grow and excel”.
A refrigerator winner, 39-year-old Kehinde Oyewole, a Lagos-based business woman, disclosed that she had been on the Glo network since 2003. “I don’t have any regrets till today. It has been a good network, providing good services and helping Nigerians. This is very kind of them”, she noted.
Member of Lagos State House of Assembly representing Oshodi-Isolo Constituency 1, Hon Jude Emeka Idimogu, who attended the ceremony as special guest lauded Globacom for  its continued care and commitment to its customers.   “Globacom is hundred percent Nigerian and we are proud of them. They have employed Nigerians and are empowering others from time to time. I will continue to patronise them, and I urge all Nigerians to do so. They have done excellently well,” he said.
Joy Unlimited Extravaganza was launched last year after which presentation ceremonies were taken across Nigeria where 15 winners  won brand new cars while 500,000 others won television sets, refrigerators, power generators and  other Glo freebies.