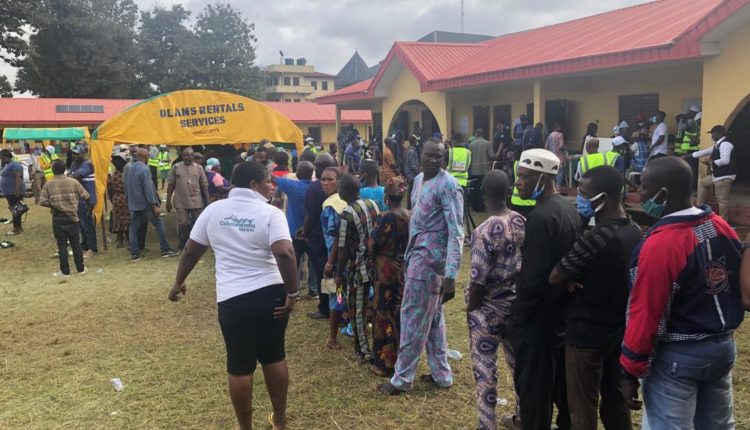 Contrary to speculations that the governorship election in Ondo State would be marred with violence, the election was peaceful with a large turnout of voters across the state despite heavy downpour in the early hours of Saturday.

Our correspondents who monitored the election in different parts of the state observed that the election witnessed massive turnout but was marred with vote-buying.

Officials of the Independent National Electoral Commission (INEC) arrived at the various polling units visited by our reporters as early as 8 am while accreditation and voting exercises commenced at 8:30 am before the heavy downpour.

The security agents attached to the polling units also arrived on time while there were roadblocks on the highway and some roads within the state in line with the restriction on movement.

However, it was noticed that most of the voters failed to comply with COVID-19 protocols as many of them were without their nose masks, while the social distancing measure was thrown to the wind.

The Card Reader machines malfunctioned in some of the areas within the state, while it was used in many of the polling units across the state for the election

Speaking after casting his vote, the state governor and the candidate of the APC, Mr Rotimi Akeredolu, expressed optimism that he would emerge victorious at the end of the exercise.

Akeredolu who voted at unit 06, ward 02, Ijebu-Owo in Owo, headquarters of Owo Local Government Area of the state commended the voters of the state for their peaceful conduct during the election and expressed satisfaction with the conduct of the exercise.

He appealed to the electorate to monitor their votes in order to ensure that their votes count and said: “I’m sure my God will give me victory at the end of the day. I put my trust in God and I’m sure He won’t let me down. My confidence is not in any man but in God.”

“From all information I’ve received, the election is going on smoothly. We have just started and the election has been peaceful so far.”

He, however, urged his supporters to remain peaceful throughout the period of the exercise and beyond.

The candidate of the People Democratic Party (PDP), Mr Eyitayo Jegede, also said that he would win the election irrespective of the challenges witnessed in the process of voting but said he would wait till the end of the poll to make a general assessment of the election.

Jegede who voted at Ward 2, Unit 009 in Akure South Local Government Area of the state, said: “So far, apart from that hitch at this particular polling unit, the turn out has been massive, it has been peaceful, orderly; voters have conducted themselves peacefully.

“I think so far, despite all the challenges, there has not been any major disruption but I do not know what is happening in the remote areas and I have not heard the reports.”

In Ese-Odo, local government area, the state deputy governor and governorship candidate of the Zenith Labour Party (ZLP) was accredited and voting began by 8:30 am at Apoi Ward 2, Unit 004, where he voted and expressed satisfaction with the turnout.

Meanwhile, massive vote-buying was noticed during the governorship election in the southern senatorial district of the state.

Our correspondent at the area noticed that, after each voter cast his or her vote, the political agents who were there to confirm who they voted for will instantly make cash payment despite the full presence of the security agents.

Our Correspondent who monitored the election in the Southern Senatorial District of the state observed that all the political parties are involved in the vote-buying and they paid between N3,000 and N10,000 to each voter.

It was gathered from a reliable source that one of the political parties deployed and disbursed between N700,000 and N1m to each of the polling units while others dole out between N300,000 and N500,000, per unit.

One of the voters in Irele, who identified himself as Sanya Adefua, regretted the vote-buying which characterised the poll, saying people must begin to see election beyond money but an opportunity to elect their chosen candidate.

According to him, “What is happening here today is really sad because votes were openly bought with N5,000 by a political party and people were happy taking it. Very unfortunate that at this level and with all sensitisation, people still follow the money and jettisoned their conscience.”

Another voter in Anglican polling units in Irele, Fagun Olawale said: “As it stands, we are going for another four years of suffering because people are trading away their future because of N5,000. I don’t know why our people cannot think and see the reality of things.”

Some agents of political parties were seen sharing money to voters in different polling units while security agents looked the other way.

“This is Agboola stronghold but unfortunately the APC guys are buying people with money. The outcome of the poll will determine whether there will be violence or not,” a voter, Ikujenla Ayo said.

The same allegations were obtainable at different polling units in the local government but when our correspondent approached different police officers for comments on the allegation they declined speaking.

The spokesperson of the police command in the state, Sam Leo-Ikoro, disclosed that allegations will be investigated, saying “We will investigate the allegations at various polling units. Such is an aberration.”