•Say’ ‘It will boost socio-economic activities’

A six kilometre road constructed by Chief Michael Ade-Ojo was recently inaugurated in Ilara-Mokin, Ondo State by the Minister of Works and Housing, Babatunde Fashola. HAKEEM GBADAMOSI looks at the social and economic impact of the road on the people of the community. 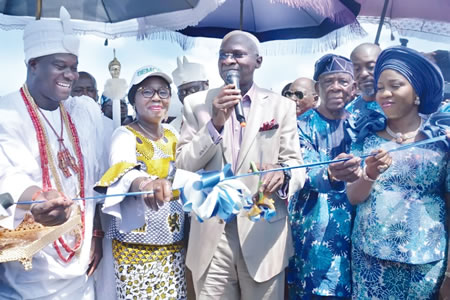 The people and residents of the ancient town of Ilara-Mokin in Ifedore Local Government Area of Ondo State refer to the town as DC (Deputy Capital of Ondo State) However as close as the town is to the Ondo State capital, Akure,  it has no federal, state or even local government presence.

Save for Chief Michael Ade Ojo, who has established a university,  Elizade University, in the town and a world class golf course, nothing would have been an attraction for people to the town, while Ade Ojo recently complemented all these with the construction of over 6 kilo metre roads in the town.

Though it is the responsibility of every government to provide infrastructure for its people and one of the yardsticks used in measuring the development of any community is good roads but situation in many communities and main towns, even state capitals left one to be desired.

Speaking during the inauguration,  Chief Ade-Ojo said the projects were designed to gradually transform his hometown into an economically vibrant town. He disclosed that the idea to construct the township road was “motivated by my personal observation during the burial ceremonies of my late wife, Chief Mrs Elizabeth Wuraola Ojo, which attracted many visitors from Lagos and elsewhere to come and bid final farewell to that wonderful woman of virtue.”

“Despite the wetting of the gravel-laid road in the morning hours, both the sun and the earth appeared to be in competition for the water evenly spread on the road, so much that by the time we arrived at Ilara-Mokin, a thick cloud of dust appeared angrily from the ground to blind us from seeing the vehicles either going in front or following behind.

“I felt badly disgraced even in my sorrowful state. My concern was, what would the multitude of friends who journeyed with me from Lagos and other parts of Nigeria say about the so-called millionaire from Ilara-Mokin whose roads were so dusty and crooked?

“That same night with my wife’s body not yet buried, I made up my mind to do something about the deplorable condition of the roads in my humble place of birth.”

Chief Ade -Ojo noted that the last time roads were commissioned in the town was in 2005 when an 8.5-km of road was commissioned by the then Minister of Works, Chief Adeseye Ogunlewe, during the reign of Dr. Olusegun Agagu as governor of the state.

He however said “I am very happy that another developmental effort has been successfully completed today as the over six kilometers of road network is being commissioned by another Minister of Works and Housing in the person of Mr. Babatunde Raji Fashola.”

He, however, encouraged all individuals to always strive to do something unique in their household, family, hamlet, village, town, city local government, state or country to raise the status of the community.

Commending the business mogul and founder of Elizade Motors, Chief Michael Ade-Ojo for his contributions toward the development of the Ilara-Mokin community, the Minister of Works,  Mr. Fashola, during the inauguration said the six-kilometre road constructed by Chief Ade-Ojo would go a long way to develop the socio – economic growth of the area.

Fashola who lauded Ade-Ojo’s commitment toward investing in the development of his immediate community, noted that infrastructure development plays a key role in the community and national development.

“This six-kilometre road construction which connects Ilara-Mokin and Ikota will ramp up social and economic growth for both communities, bringing transformation to Ondo State and Nigeria by extension.

“The road construction has also led to the creation of jobs for both skilled and unskilled workers, and other professionals who were involved in the project’’ Fashola said.

He described the project as a remarkable one which will contribute meaningfully to the speedy actualisation of community growth and the enhancement of the citizens’ welfare, urging others to emulate Ade-Ojo.

However,  the joy of the people of the knows no bounds as they commended Ade-Ojo philanthropy gesture as unequal, saying that the great son of the town has been able to place the town on the world map.

Speaking to Nigerian Tribune,  a septuagenerian, Madam Adetutu Adepegba, said apart from the road constructed by Ade-Ojo, the establishment of the golf course and the university had immensely added to the economic development of the town.

She said, “economic activities had picked up since the establishment of Elizade University and the Smokin Hill Golf course. They have attracted so many people to this town. We will continue to pray to God to spare his life for us.”

Another indigene of the town, Muyiwa Afolabi said Ade-Ojo  had secretly touched so many people’s lives in the town. According to him, “Chief Ade-Ojo has sponsored hundreds of students from his community, and has also helped to get them jobs.

“All indigenes of this town admitted to Elizade University are enjoying free education and scholarships, courtesy of Elizade. My prayer is that other people should learn from this great man from this town who has invested in every home in Ilara-Mokin  without asking for reward.”

Also speaking, Ibitayo Anifowose, says the construction of the network of roads is one of his several contributions to the development of the Ilara-Mokin community.

He noted that every community and all communities across the country will be developed if every rich individual embarks on projects that will affect the lives of their people.

According to him, “we should stop  hoping on government at all time, we can build our own Washington or Las Vegas here too.  Let every citizen emulate this great philanthropist and help build their own towns, villages and communities and should see it as service to God and humanity

“If you are rich, prove it by the number of the people you have raised, trained and sponsored and the number of community projects you have successfully initiated,  executed and completed for your community and not the number of cars and houses. Ade-Ojo is godsend to Ilara- Mokin.” He urged other well-to-do members of the community to also strive to extend similar support to the community.

One unique feature of the inauguration was that the people and residents of the town were in uniform while the event was graced by many dignitaries, including the Ooni of Ife, Oba Adeyeye Enitan Ogunwusi, Ojaja II; the Osemawe of Ondo, Oba Victor Kiladejo,  Deji  of Akure;  Oba Ogunlade Aladetoyinbo, wife of the Ondo State governor, Mrs Betty Anyanwu-Akeredolu and the Alara of llara-Mokin, Oba Abiodun Aderemi Adefehinti.