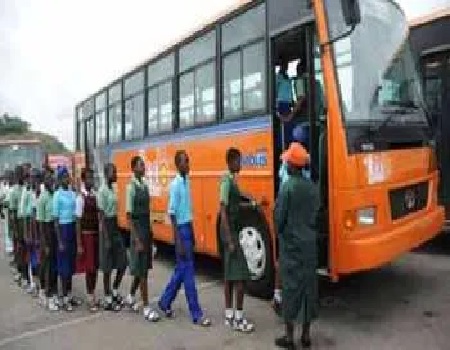 Pupils of public schools in Ondo State were stranded on Monday, as the operation of the free shuttle buses introduced by the immediate past administration in the state has been suspended.

The absence of the free shuttle buses on roads on Monday dashed the hope of the students as many of them trekked a long distance to their various schools, lamenting the sudden suspension of the free ride.

Tribune Online gathered from an official of the Ministry of Transport in charge of the scheme, that the state government can no longer maintain or finance the scheme over lack of fund for maintenance and fueling of the buses.

He explained that the Ministry had failed to settle debts incurred for the fueling of the buses which had accumulated for a long period of time while fuel dealers declined to supply fuel on credit.

He said the free shuttle scheme suffered a setback as a result of insolvency, noting that the buses might not hit the streets earlier than next month.

However, the Special Adviser to the governor on transport, Mr Tobi Ogunleye, dismissed insinuation that the scheme had been suspended or stopped.

He attributed the suspension of the scheme to the general maintenance of the vehicles to ensure effectiveness on the road.

Ogunleye assured the students and the public that the shuttle buses would return to roads before one of the weeks.

But some parents who spoke with our reporter, lamented the non-operation of the buses since last week when schools resumed from Christmas and new year break.

They described the sudden suspension of the programme as unfortunate, called on the state governor, Mr Rotimi Akeredolu not to allow the free shuttle buses initiative to die untimely.

A parent, Mrs Mojisola Johnson from Ikare-Akoko said the suspension of the buses operations had caused untold hardship for the pupils and financial burden for parents.

The students also lamented that the ministry failed to inform them before the resumption that the buses would not be available, saying they were being subjected to trekking long distances because their parents never prepared for the expenses.

They, however, appealed to the governor not to rest the programme for the benefit of the underprivileged who have been enjoying the service since it was initiated by the previous administration.