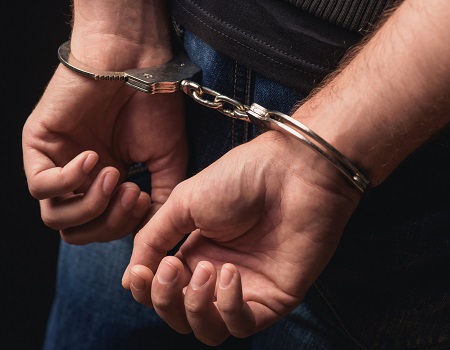 Detectives from the Ondo State Police Command have arrested a suspected armed robber, Simeon Nonye Anyaegbu, over the attack and gruesome murder of a Catholic Priest, Reverend Father Godwin Ofonyelu and his younger brother, Obikwelu Ofonyelu.

The suspect who was arrested in Port Harcourt, Rivers state, last week following a tip-off after about four years of committing the crime with others now at large.

Anyaegbu with a member of his group attacked the Catholic Priest and his brother who were on their way to Ikare Akoko and set them and the vehicle ablaze after robbing them at gunpoint in 2015.

However, the family of the deceased have raised alarm over the delay in charging the suspect to court by the police alleging the policemen in charge of the case of complicity.

The family stated that suspect who was arrested last week was expected to appear before the court last Tuesday but said the police failed to drag the suspect before the court.

Speaking on behalf of the family, Mr Christian Ofonyelu, who is the father of the deceased, Rev. Father Godwin and his brother Obikwelu, called for justice in the gruesome murder of his children.

The father also raised the alarm over threat to his life and other members of his family by one Simeon Nonye Anyaegbu suspected to be behind the death of his children.

In a petition addressed to the Deputy Commissioner of Police, Ondo State Police Command Akure,Ondo State and dated 19/08/2019, the deceased father, through his legal counsels said: “One Simeon Nonye Anyaegbu of Umuajana Village, Ebenebe, Awka North Local Government, Anambra State, who has confessed to masterminding the armed robbery and their killings of my children because of the land dispute has been threatening  our client.”

It would be recalled that a group of armed men ambushed and killed Rev. Father Godwin Ofonyelu, 40 years, and his brother Late Obikwelu Ofonyelu, 36 years, along Owo-Ose road in 2015 while Anyaegbu was arrested as the principal suspect.

Anyaegbu who is of Umuajana Village, Ebenebe, Awka North Local Government, Anambra State was alleged to have masterminded the armed robbery and the killings of the two men because of the land dispute in Anambra State.

It was learnt that the deceased was coming from Lagos when hoodlums attacked them between Ose and Oba-Akoko and shot them several times while the vehicle in which they were travelling was said to have consequently burst into flame.

In his reaction, the Police Public Relations Officer (PPRO) in the state,  Mr Femi Joseph who confirmed the arrest of the suspect, said the police would follow due process in investigating the case before dragging the suspect before the court.

The Police spokesman, however, said that the case would be charged to court at the appropriate time.