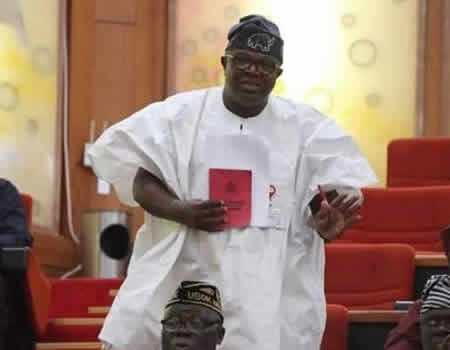 Tofowomo who was travelling to Akure with a governorship aspirant of the People Democratic People (PDP) Mr Banji Okunomo and two others when the incident happened at Igbaraoke axis of the road.

According to sources, the lawmaker and others involved in the crash were rushed to the Trauma Center in Ondo town where they are admitted for treatment.

The source said “They were rushed to the hospital immediately after the crash and two of those involved in the accident have been taken to the theatre all ready for surgery,” the source said.

Meanwhile, the Ondo state leadership of the PDP led by its chairman, Chief Clement Faboyede has visited the victims in the hospital.

Speaking on the development, the PDP  Director of Media and  Publicity in the state, Zadok Akintoye who confirmed the accident said “we wish to inform members of the party and all well-wishers of Senator Nicolas Tofowomo, Mr Banji Okunomo, Mrs Yetunde Dada and Mrs Toyin Ajinde, that they are all in good states of recovery after the unfortunate accident that occurred yesterday on their way to Akure from a very important trip to Ibadan.

“Our party appreciates the efforts of the medical team at the Trauma Centre in Ondo, private and public ambulance services that came to their rescue and everyone who has risen up to support them at this trying time.

“Our party must yet again commend the brilliance of our doctors and medical professionals for their efforts. Our prayers remain with them.”

Similarly, In line with the Corps’ policy of post-rescue follow-up on victims’ care, the State Sector Commander of the FRSC, Mr Rotimi Adeleye and Unit Commander, Ondo unit, Olanrewaju Adewumi on Saturday paid a visit to Senator Tofowomo who was involved in a road crash on Friday 6th 2019 along Akure / Igbaraoke road.

According to the Corps, the Senator and other victims are responding to treatment and efforts of FRSC and other security agencies for their quick response.