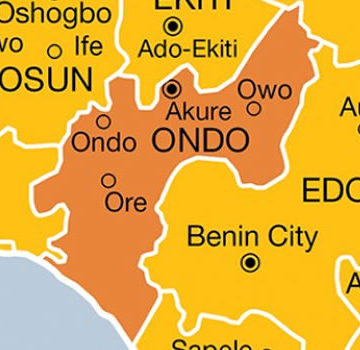 THE new leadership of Ondo State House of Assembly has called on President Muhammadu Buhari to intervene in the crisis rocking the chamber, saying the president’s quick intervention in the saga was needed to bring about the needed peace not only in the hallowed chamber but in the entire state.

The House, under the speakership of Hon Olamide George also called on the National Assembly to rise up and wade into the crisis, bring about peace, declaring that “an attack on the Assembly is an attack on Nigeria’s democracy.”

The Speaker, Hon Olamide George and the Majority Leader, Hon. Araoyinbo Olugbenga, both made this call on Sunday at a press conference in Lagos, even as they commended the Inspector- General of Police, Abubakar Idris, over the arrest of the Chairman, Ondo State chapter of National Union of Road Transport Workers (NURTW), Jacob Adebo aka Idajo.

The ongoing crisis in the House aftermath of impeachment of the former speaker, Hon Oleyeloogun and his deputy have pitched the Hon George group of 18 members against that of former with just eight members, giving rise to an invasion of the parliament by thugs supposedly led by Idajo during which several lawmakers, among others, were wounded and hospitalised.

George said three out seven members that were initially hospitalised were yet to be discharged, just as he disclosed that the rest members of his group of 18 were already airborne and on their way to Lagos as of the time of the conference for a scheduled meeting on Monday at Police Headquarters, Alagbon, Lagos where a face to face interrogation would hold between them and the arrested NURTW chairman.

According to the speaker, the arrested NURTW boss, Adebo aka Idajo had led the violent attack on members and staff of the Assembly as well as journalists, causing wanton destruction of properties at the Assembly complex on Friday November 9th, 2018, adding that he as speaker was not spared as his car was shot at and had to be rescued by a security official, who took him to Osogbo, the Osun State capital.

George expressed the gratitude of his leadership to the people of Ondo for standing by the Assembly at the period which he said democracy was “visited with serious assault with brigandage unleased on the sacred institution of Legislature of the state by Idajo and his men at the behest and instigation of some faceless, nameless and unconscionable alleged government staff.”

“Since then, our beautiful state of Ondo has been crying for help,” he lamented.

Recalling that the NURTW boss led more than 200 thugs wielding dangerous weapons and consequently inflicted bodily injuries on the lawmakers, members of staff, journalists, among others, the Majority Leader, Hon Olugbenga said members were not surprised at the happy celebration and profound joy and relief that enveloped the entire city of Akure over the arrest.

“It has been a mystery why just one individual would have the power to hold an entire state to ransom with his nefarious activities such that he decides who or who does not live in Ondo State. His dimension of thuggery in the last two years is a huge concern to citizens and residents of the entire state in general and those of Akure in particular but we are confident that with his arrest, security and peace will return to Ondo State.

“Our sincere hope is that the police investigation will be thorough, such that Idajo and his gang of hoodlums will be apprehended, prosecuted and punished according to the law of the land, so that our state will be totally free from the brigandage and terrorism which had held sway under the direction of the NURTW,” the majority leader said.

Olugbenga also called on the police to ensure protection for him and his other colleagues and family members, saying that ever since they decided to take the bull by the horn to effect leadership change in the Assembly, they had been inundated with several anonymous death threats “a situation that has been worsened by the arrest of Idajo.”

“We state categorically that his minions are at work again,” he declared.

2019: PDP has nothing to offer, Senator Adeola tells Nigerians