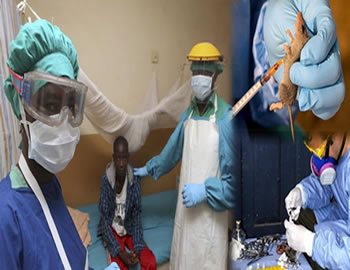 NO fewer than 102 suspected cases of Lassa Fever have been reported in about eight local government areas of Ondo State.

The state governor, Mr Rotimi Akeredolu, who confirmed this during a state broadcast on Lassa Fever outbreak on Saturday said laboratory tests had confirmed 36 of the 79 cases tested had been infected with the deadly disease while nine death had been recorded in the state.

The governor said at present 127 Hospital Contacts and 308 Community Contacts were line-listed in all the affected Local Government Areas while thirty have completed their follow-up.

Speaking on the effort of the state governor to curtail the spread of the disease, the governor said an Emergency Preparedness and Response Team has been reactivated at both the State and Local Government levels in addition to Active Surveillance and contact tracing in the affected Local Government Areas.

He added that sensitization and community mobilization are going on in all local government areas for traditional rulers, community leaders, religious leaders, political leaders, market women and other stakeholders.

He said patients are being managed at the Federal Medical Centre, Owo, while confirmatory tests are done at Irrua Specialist Teaching Hospital, Irrua, Edo State.

He said, “Publicity is also ongoing through radio jingles, radio and television discussions in our media houses.”

”Information, Education and Communication materials such as handbills, flyers and posters have been produced and these are being distributed.”

Akeredolu said some vehicles have been allotted and dedicated for transportation of samples to Irrua Specialist Teaching Hospitals, Irrua, Edo State

He disclosed that state government has expanded the Infectious Disease Isolation Unit at the Federal Medical Centre, Owo, as part of the effort by his administration to curb the spread of the disease.

“Some Personal Protective Equipment, PPE, Drugs, and hospital beds were donated to FMC, Owo to support the management of the patients.”

“Some Nursing Staff were also released to the Treatment Centre to support the management of the patients.”