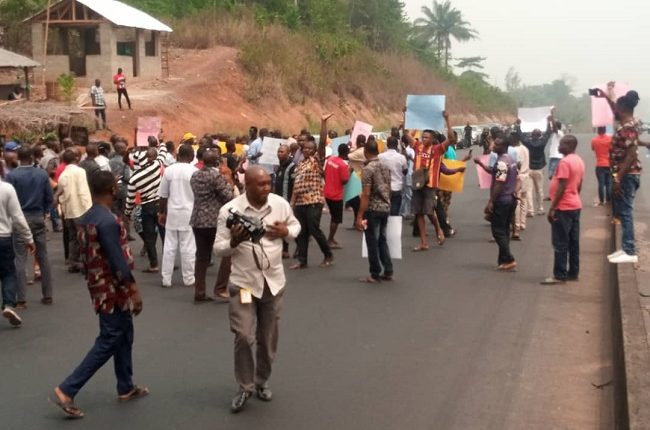 Members of the Flicthers Association in Ondo State on Monday blocked the Benin-Ore/ Lagos expressway way protesting over alleged extortion and molestation of their members by Ogun State Government.

Members of the association who barricaded the busy road at the Ajibandele end of the highway caused traffic gridlock for some hours, causing temporary hardship for commuters.

The protesters complained over what they called illegal extortion and barbaric activities of the officials of Ogun State Government, in the name of collecting revenue from them while transporting planks and teak wood through the Gateway State.

They stated that many of their members have suffered physical assaults from agents of the Ogun State Government, at any slight provocation.

The Chairman of the Flitchers Association in the state,  Mr Aro David, alleged that the officials of the Ogun State Government, collect money from various points them up while driving through Ogun State to Lagos, saying members of the association usually pay at five points.

He said money are collected from them under various headings as Community Ticket, Local Government Ticket, Environmental Ticket, Parking Space at various points on the Expressway.

He, however, issued a seven-day ultimatum to Ogun State government to call its officials to order, saying the “unlawful act and inhuman treatment” is a deliberate act targeted his members by the Ogun State officials.

He recalled that the situation had been going on for about four years, saying they have been paying for tickets and fines ranging from N50,000 to N2 million as against the official amount of N7,000, and said the aim of the officials in Ogun state is to run them out of business.

“While Ondo State Government from where the planks emanated collects only N7,000 only at Produce Post, Ogun State Government officials, that are supposed to collect only N3,000, ended up extorting over N35,000 from us under various headings.

“We have been subjected to various times and physical harassment whenever we tried to explain things to these illegal tax collectors on the Federal Government Expressway.

“My members in Ondo State can no longer tolerate these illegalities and we are calling on the Governor Dapo Abiodun to call these collectors and consultants to order.

“These planks originated from Ondo and Edo State and our colleagues in Eso State are also complaining. Ogun State that is just a passage to us collect N35,000 while the owner of the planks, collects a maximum of N10,000 only. This is barbaric and cheating. We are going to resist this.

“We hereby give Ogun State Government ultimatum of seven days, to collect this illegality and do what is right. Should government failed to address our grievances, it will strain the relationship between Ondo and Ogun State and we are ready for the confrontation.”

Also speaking, the Chairman of Klick Connect, Dr Alex Ajipe, who is the Consultant to the Ondo State Ministry of Natural Resources, described collection by Ogun State Revenue officials, as illegal and extortion in nature.

Ajipe also condemned the physical attacks by suspected agents of the Ogun State Government, as barbaric, that should be stopped by Governor Dapo Abiodun.

He said: We have confirmed extortion and illegal collection by the officials of Ogun State Government on Federal Government Expressway.

“We have made various contacts with Ogun State Government. The receipts displayed by the flitchers, confirmed that they are illegal collections.”

However, Ajipe appealed to Governor Dapo Abiodun, to look into the complaints of the traders and as brothers whose two governors are committed to well being of residents.

He specifically appealed to the Ogun State Governor to call the people to order in view of the prevailing economic and security situation in the country.

In its reaction,  the Ogun State Commissioner for Forestry,  Mr Tunji Akinosi said the flitchers  had been trespassing into the state, saying flitching was illegal in Ogun state.

He said, “If flitching is legal in Ondo,  it is illegal in Ogun. If you saw planks in Ogun State,  it is better you sell in your state,  if you cross it to our state,  the planks would be seized  and the vehicle would also be seized.

“We have been seizing and they had been coming to beg but this month,  we have made up our minds that any vehicle seized in connection with illegality.”