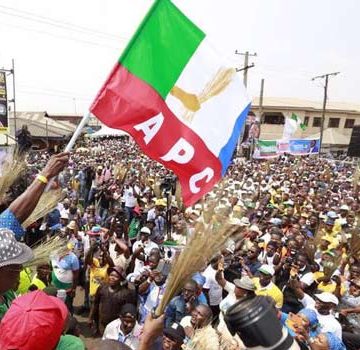 THE crisis rocking the All Progressives Congress (APC), Ondo State Chapter, might soon be resolved, as the Reconciliation Committee put in place by the National body of the party has recommended a way out of the leadership tussle within the party in the state.

The Reconciliation Committee, headed by Prince Tajudeen Oluyele Olusi, has recommended the return of Isaacs Kekemeke, to the office as the State Chairman of the party in order to allow him to complete his tenure.

The Committee alternatively, recommended that the embattled chairman should be persuaded to vacate the Chairmanship seat and be rewarded with a befitting federal appointment of federal board or corporation.

In the report of the panel, made available to journalists in Akure, Ondo state capital, the committee noticed that the leadership crisis rocking the party, dated back to to the Congress that produced Kekemeke as the party Chairman which pitched him and his deputy against one each other.

The panel said the crisis escalated during the last governorship election in the state saying the party was balkanized into different camps of the aspirants, saying despite Akeredolu winning the primary and the governorship election, the tension between the two camps failed to douse.

As a result of the dispute, the Committee said “Kekemeke was no longer acceptable to the governor and some members of the party in the state.

“It is the observation of the committee that in the light of the present situation both the governor and Kekemeke seem irreconcilable.”

Other recommendations of the panel included the bridging of the communication gap among the party organs, holding regular meetings, from the unit to the state levels and regular meeting of party representatives with the governor.

They also recommended that every stakeholder should be enjoined to forget the past and move forward to ensure a cohesive and strong party that will face future elections with a united front.

Others included “that the state caucus should be properly constituted ensuring that qualified and eligible elders are appointed into the caucus as it contained in the constitution of our party and their advisory roles be sought on issues affecting the party.

“It is our considered opinion that the governor should forget and forgive misdeeds and shortcomings that arose during the period of the contest and even during the elections so that unity of the party can be strengthened.”

The panel recommended that the group of Dr Segun Abraham who was challenging the outcome of the party primaries in court should be appealed to and withdraw the case pending before the court and be admitted into the party.

ALSO READ: 2019: APC, PDP and the reconciliation moves across states

There had been a crisis in the state chapter of the APC; leading to the suspension of Kekemeke as chairman and the appointment Mr Ade Adetimehin as the acting chairman of the party.

However, the Southwest geo-political zone chapter of the party headed by Chief Pius Akinyelure set up a five-man panel to find an amicable solution to the crisis rocking the party. Aside Olusi, other members of the panel included Alhaji Tajudeen Bello, Chief Jide Awe, Ayo Afolabi, Chief Akin Okle and Prince Akintola Omolaoye.