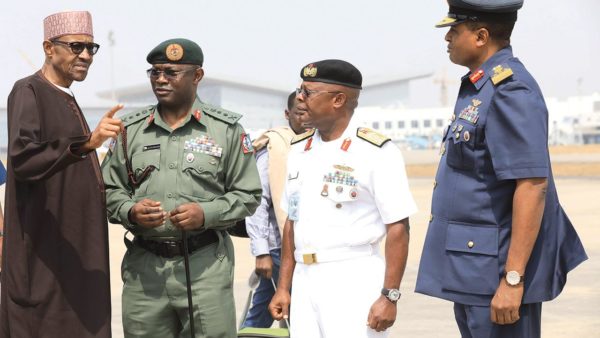 Following the political violence that erupted in Ipele in Owo Local Government Area of Ondo State on Tuesday, where supporters of the Peoples Democratic Party (PDP) and All Progressives Congress (APC) clashed, security chiefs in the state on Wednesday, visited the scene of the incident.

The state Commissioner of Police, Mr Bolaji Salami and the Commandant of the Nigeria Security And Civil Defense Corps, (NSCDC) Philip Ayuba, visited the town to assess the level of destruction by the political thugs.

Speaking after the inspection, Salami read the riot act to politicians, political thugs and their followers to conduct themselves in line with the Electoral Act or face the wrath of the law, saying the command would no longer condone any act of thuggery, violence, indiscipline and lawlessness.

He further warned the youths against being used as political thugs, saying anybody caught would be prosecuted, explaining that “the command has zero-tolerance for violence as we do not belong to any political party”

The police boss identified the shells of the bullet recovered from the scene of the incident as that of Pistol, AK 47 and pump-action which he said are prohibited arms for civilians.

He frowned over the destruction of property destroyed during the fracas while noting that scores of those injured in the attack are not a member of the two rival political parties.

He, however, disclosed that the command has commenced an investigation into the incident, assuring that the perpetrators will be brought to book.

Speaking on the command readiness for the next weekend election, he said: “I have always assured the people of Ondo state that security will be total and everybody will be allowed to vote for the party of their choice.”

The Security Chiefs also visited some of the victims of the attack at the Federal Medical Centre, Owo, where they are receiving treatment

One of the victims, Nike Alale, who said she recently returned from Norway, while narrating her ordeal said she was attacked while buying fuel at Bova’s Gas Station at Aro junction in Owo.

She said:” We were buying fuel here and all of a sudden we heard gunshots. We had to run inside the fuel station office.

“We were watching them as they destroyed my vehicle. They stole all the valuables in my car including my phones and this car document. I am not a member of any political party

About eight people injured on Tuesday, while over 20 vehicles destroyed during a fracas between the supporters of the Peoples Democratic Party (PDP) and the ruling All Progressives Congress (APC) in the state during a campaign rally in Ipele.