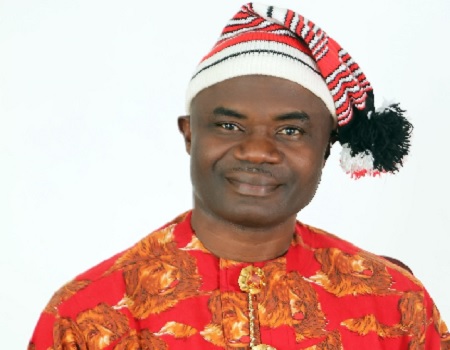 The Deputy Governor of Abia State, Mr Ude Oko Chukwu, has attributed the victory of the party in Ondo State during the 2019 Presidential election to the unity of the party and its strict adherence to the principles of internal democracy.

Chuckwu who stated this during the ward congress of the party in Akure, Ondo State capital, the outcome of the election revealed that the Peoples Democratic Party (PDP) is set to reclaim the state in the forthcoming governorship election in the state.

The Abia deputy governor who led other chieftains of the party to the state to oversee the conduct of the ward congress held across the 203 wards in the state, said the unity of the club is not negotiable, urging members to remain one big family ahead of the election.

He said: “Ondo State is a PDP State. Going by the statistics of the result of the last presidential election in 2019 Ondo State came first not just in the South West but the party delivered our presidential candidate as well as two PDP senators and a substantial number of House of Reps seats.

“2020 is the election year in Ondo State and we are already doing everything humanly possible as a party to ensure that we will recover Ondo State. We can only achieve this when we continue to remain united, remain focused and working together that our party remain stronger and stronger on a daily basis.

“With what we have seen, the conduct of congresses went smoothly and the results are already coming in. We will prepare our report and send back to the national headquarters.

“I’ll want to appeal to our party faithful to please let’s go on and carry out the assignment of this exercise in such a way and manner that we will repeat exactly what Ondo State is noted for politically. I want to assure everyone that we are here to conduct hitch-free congresses at the local government level.

“In almost 95 per cent of the wards they agreed on consensus, that means there is a unity of purpose. There was no fighting, the process went so well without any issue. I’m impressed with the entire process.”

The state Chairman of the party, Clement Faboyede, commended the Oko Chuckwu-led electoral team of thoroughness for the congress, noting that the congress was rancour-free due to the harmony existing within the party.

Faboyede said the party under his watch had set machinery in motion towards presenting a formidable candidate among the 17 aspirants jostling for the ticket.

“As at present in Ondo State, we have 17 aspirants gunning for the party’s ticket ahead of the forthcoming governorship election. Out of the 17, only 8 are functioning. The reason why the number is high is because they have seen light at the end of the tunnel.

“In this regard, the party have set up an Elders’ Screening and Advisory Council to trim down the numbers of the aspirants to like eight or seven. The screening committee is headed by our very revered leader, Senator Bode Olajumoke.

“I’m sure that by the time the council sits down and make its pronouncement, everyone will have no choice.

“By the time we are going for primary, it will either be affirmation or contest between two or three aspirants because this is a disciplined party, it is not a shredded party, it not a party that is been divided between interest groups. We are focused on reclaiming Ondo State.”