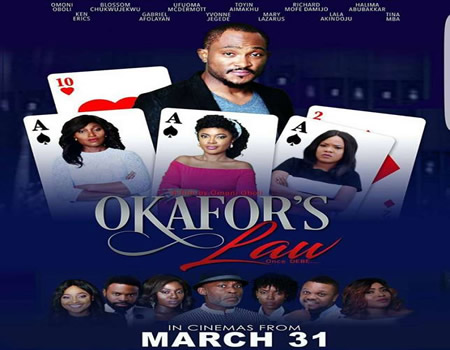 A Federal High Court sitting in Lagos, on Wednesday allterials relating to the contended movie, Okafor’s Law be seized pending the determination of a suit over the rightful owner of movie.

The court also ordered that Nollywood Producer, Omoni Oboli, be served with court processes over allegation of copyright infringement on the movie entitled Okafor’s Law.

Juatice Ibrahim Buba ordered that advance copies of processes must be served on counsels by email, so as to achieve justice on the matter in good time.

It would be recalled that Oboli had been accused of copyright infringement on the Okafor’s Law movie, with the plaintiff, JudeIdada claiming that Oboli stole his story idea.

Earlier during the proceedings, counsel to the plaintiff, Mrs O Otudor, informed Justice Buba that she had received a counter affidavit for the first and second defendants, but yet to get any processes from the third defendant.

The lawyer added that counsel to the first and second defendant had just served their counter affidavit on her in the courtroom, with an addition that she needed time to study and respond to same.

Otudor charged the court to grant adequate time to allow the plaintiff file a reply.

On his part, counsel to the first and second defendants, and former President of the Nigerian Bar Association (NBA), Augustine Alegeh, prayed the court for an order of speedy hearing of the motion on the reason that the exparte orders had stalled the premiering of the film on March 24.

The SAN argued that the movie had been premiered in Toronto and Stockholm in 2016, with a further contention that its launch had been billed for March 31 (Friday), and so, a speedy hearing of the motion on notice would be eminent.

Justice Buba adjourned until March 30 for hearing of the motion by 10am.

It would be recalled that Justice Buba had issued an order oinstructing that a film, captioned “Okafor’s Law” be seized.

The court equally granted an interim order, suspending the release and subsequent launch of the film directed by Nollywood Producer, Oboli, in any movie theatre or Cinema house on March 31, 2017, pending the determination of a motion on notice initiated before the court.

Justice Buba further issued a directive for the seizure of all copies, materials, projections or infringing materials, relating to the subject matter.

The judge arrived at the decision, consequent upon an exparte application instituted by a firm known as Rancoteur Productions Ltd, on behalf of a Canada based script writer, Jude Idada.

Specifically, the script writer is contending that he is the bonafide owner of the film “Okafor’s Law” since same is his intellectual property.

Idada had through Senior Advocate of Nigeria (SAN), Anthony Idigbe urged Justice Buba to grant an order, stopping the premiere and release of the said “Okafor’s Law”, pending the determination of a copyright infringement suit filed against Oboli.

The defendants in the action are: Dioni Visions Entertainment, Omoni Oboli, and The Filmore Ltd.

In his exparte application, the plaintiff had prayed the court for an order, restraining the premiere or release of the said film, alongside an anton piller order, seizing all copies of the infringing material.