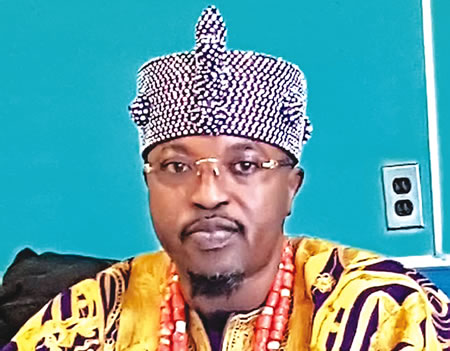 The Paramount Ruler of Iwo land, HIM Oba Abdulrosheed Adewale Akanbi on Saturday said, his throne has concluded plans to organise educational management course on ranching for genuine repentant Fulani herdsmen in his domain.

The royal father who made this known in a statement in Osogbo said he took the step to let the good, willing and repentant herdsmen to visit his palace for proper integration into the society.

According to him,” I’m different because I love discussing a solution. You don’t throw a bad child with bathing water. The space is too delicate to declare war. Let’s consider the good as against the black sheep among the Fulanis. Iwo Remains the highest host of Fulani herdsmen in Osun State”

“The innocent good and the willing repentant Fulani herdsmen are welcomed to my palace. I will host, orientate and properly integrate them.”

” I have orientated these Fulanis severally. I visit them frequently to ensure harmonious living. Their Seriki reports to me on weekly basis. The affinity has been established mutually. I need more type in my domain. I have the dosage of peace between Yorubas and Fulanis.”

“The bad eggs among the Fulanis should be fished out and prosecute. As a natural paramount ruler, I can’t unjustly fight the good ones I have in my domain. Their grandparents were born here.”

“The bilateral symbiotic relationship is lubricating a peaceful coexistence. I want more of the likes of pure-minded, progressive and honest herdsmen in my domain. I’ve even advised them to start sending their children to school and embrace modern means of cattle raising. The repentant Fulani herdsmen should relocate to my domain.”

Oluwo who disclosed that Iwoland has the best species of herdsmen in South-Western Nigeria, assured peaceful, symbiotic co-existence, the relative peace and mutual understanding between the Yoruba and the Fulanis in his domain.

Bearing of arms by Herdsmen: Bauchi gov an anarchist, not fit to hold public office ― Akeredolu