The South West
By Yejide Gbenga-Ogundare On Jan 3, 2017 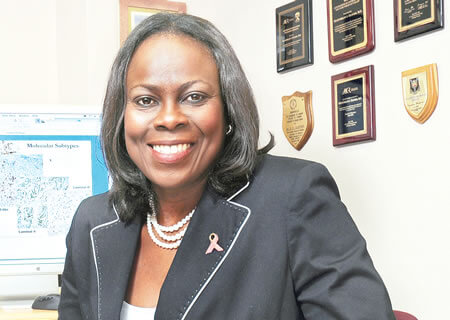 If the United States President- elect decides to make good his threat of sending immigrants back to their country, especially Nigerians, there are so many Nigerians resident in the United States which would be untouchable, this is due to their importance to the community in which they are domiciled. One of such untouchable people include a medical practitioner; Professor Funmilayo Falusi Olopade.

Nigerian born Professor Olopade is an expert in cancer risk assessment and individualized treatment for cancer but it is not just a routine expertise, she is a foremost consultant for the most aggressive forms of breast cancer as she developed novel management strategies based on an understanding of the altered genes in individual patients.

The daughter of an Anglican vicar started her career in Nigeria almost four decades ago immediately after getting her medical degree from the University of Ibadan in 1980 where assisted with government scholarship, she earned an MBBS with distinctions in pathology and pediatrics before moving on to the University College Hospital in Ibadan for internship in surgery, medicine, pediatrics and obstetrics and gynecology.

After this, she started work at the Nigerian Naval Hospital, from where she moved to Chicago in 1983 to further her education at the Cook County Hospital and by 1886, she had risen to the rank of Chief Resident in the hospital.

The fellow in Oncology and Hematology commonly referred to as the Future Physician-Scientist after making landmark achievements in the war against cancer among women especially those of African descent. Dr Olopade stresses comprehensive risk reducing strategies and prevention in high-risk populations as well as an earlier detection through advanced imaging technologies.

Her exploits in the fight against cancer did not go unrecognized as in 2005, she received $500,000 as genius grant fellowship from the MacArthur Foundation in recognition of her ground breaking research on genetics of breast cancer among women of African descent using Chicago and Nigeria as sample audience.

Also, the Walter L. Palmer Distinguished Service Professor of Medicine and Human Genetics was appointed as the only African member of the US National Cancer Advisory Board by President Barrack Obama in 2011.

Her breakthrough came in the field of cancer when she undertook laboratory examinations of the genetic changes involved in Leukemia and discovered a gene that was involved in the suppression of tumor growth, leading to landmark victory in her war against cancer.

Dr Olopade is a genius in her field and has become a global authority on cancer risk and prevention as well as individualized treatment based on risk factors and quality of life.

And she never forgot her roots; she works with doctors in Nigeria and government officials and drug companies in Africa to improve education and cancer treatment. Further, she is very concerned about the plight of Nigerian women fighting to live and conquer cancer and works with native Nigerian doctors to establish a clinical trial of two chemotherapy tablets; Xeloda and Herceptin.

For her, the work in fight against cancer is far from done and she intends to find out more about the disease and she reiterates this often. “Part of our work as scientists is not only to study biology and science but also to engage the society. If we can’t translate our research to help people, then, why are we doing the work,” she once asked in an interview.

She believes that breast cancer isn’t one single disease as it affects women of different population in different ways and her major goal is to improve mortality for African women.

Dr Olopade was elected to serve on the board of Directors of the John D. and Catherine T. MacArthur foundation and presently directs the Center for Clinical Cancer Genetics and Global health and is the Dean for Global Health.

She has frequently been celebrated for her development of novel strategies for managing cancer based on an understanding of the altered genes in individual patients with special focus on African and African-American women.

The Chairman of the MacArthur board, Majorie Scardino, recently while speaking about Dr Olopade’s appointment stated that, “her innovative research and clinical practice reflect her deep commitment to the human condition. Her scientific expertise and her creative problem solving will help the board as it continues to guide the foundation’s work on a new course for maximum impact.”

Also describing her, the MacArthur President, Julia Stasch, said, “Dr Olopade brings a wonderful blend of global leadership, active and enthusiastic curiosity and deep practicality in many areas of expertise and interest.”

She is an elected member of the Association of American Physicians, National Academy of Medicine, American Academy of Arts and Sciences and the American Philosophical Society.

And regularly, she continues to become an integral part of the American society and bring glory to the Nigerian society.