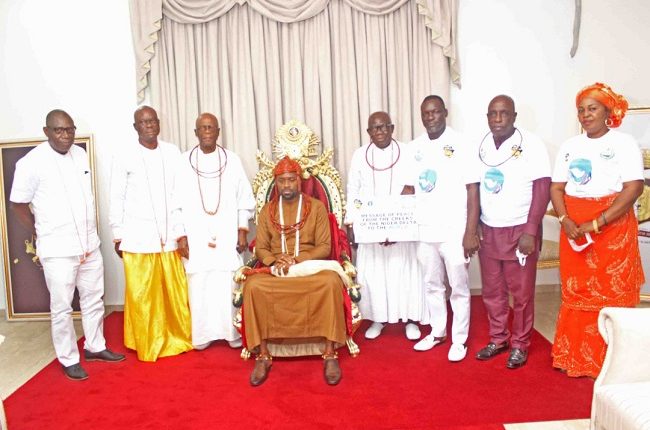 Share
The Olu of Warri, Ogiame Atuwatse III, on Tuesday played host to a delegation of the Center for Peace and Environmental Justice (CEPEJ), civil society and non-governmental organisation at the palace to mark the 2021 International Day of Peace.
The Country Director and CEO of CEPEJ, Comrade Chief Mulade,  Sheriff, said the group was at the palace to celebrate the Olu for his contribution towards concretizing peace through sensitization of the masses to embrace peaceful coexistence.
Mulade, who’s a governorship aspirant for Delta State 2023 general elections, stressed the need to continuously build and support peaceful coexistence in Nigeria, most especially with neighbours in Warri, Delta State, in line with the 2021 theme of the World Peace Day: ‘Recovering Better for an Equitable and Sustainable World.’
CEPEJ took the initiative to key into the International Day of Peace as observed around the world on 21st September, pursuant to the United Nations General Assembly’s Declaration in 1981 to strengthen the ideals of peace, through observing 24 hours, non-violence and cease-fire.
Mulade, who’s the first Ijaw leader to take peace advocacy to the Olu of Warri, celebrated the monarch on his coronation and inducted him as CEPEJ’s Royal Peace Ambassador and Patron.
Comrade Mulade, who advocated that peace begins with the inner mind to the heart and to the people, requested the Royal Father to nominate one of his Palace Chiefs to be a member of the Local Organizing Committee for the upcoming Ijaw/Itsekiri Peace and Unity Football Tournament.
Earlier, the Chairman, Board of Trustees of CEPEJ, Dr. Chief GodwIn Orhadahwe, who gave a brief overview of the activities of the NGO, praised Ogiame Atuwatse III for revoking an age-long curse placed on Nigeria by his grandfather.
Responding, the Olu of Warri, Ogiame Atuwatse III, thanked the CEPEJ team for the visit, and commended Comrade Mulade for taking his peace crusade to all corners of Nigeria and Africa.
The Warri monarch stressed the need for sustainable peace and development based on the truth and resolution of underlining wrongs and injustices in the land.
He enjoined the NGO to intensify its peace crusade in Nigeria and Africa.
Highlights of the visit were the presentation of gifts and souvenirs by Chief Mulade to the Olu, as well as a group photograph with the Ogiame, with CEPEJ’s Country Director holding a placard reading: A Message of Peace from the Creeks of the Niger Delta to the World.
Also on the CEPEJ’s team were the NGO’s Corporate Manager Administration and Accounts Mrs Tina Agidi; the Senior Programmes Manager, Mr Sam Ideh; the Communication and Programmes Manager, Mr Dan Tonfawei; as well as the ICT Manager, Mr Olatoke Olasupo.