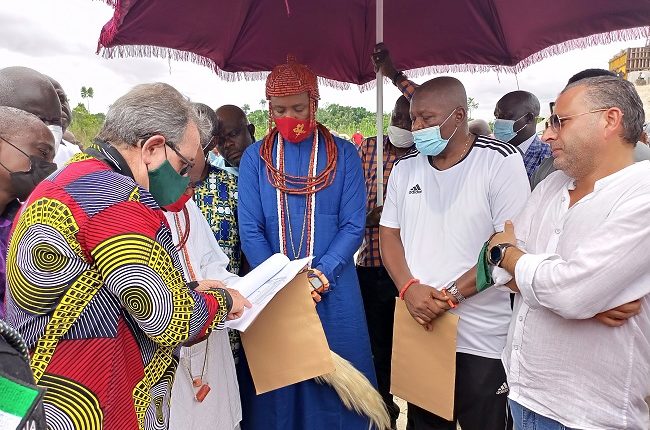 The Olu of Warri, His Majesty, Ogiame Atuwatse III, has called on Itsekiri communities to continue to support the contractor handling the Trans-Warri Ode-Itsekiri bridges and access road project by providing a peaceful environment.

The revered monarch made the plea on Monday while on an on-the-spot assessment of the road project meant to link the riverine communities to Warri city.

It will be recalled that the road project, worth N40,8 billion, was awarded to Setraco Construction Company on August 22, 2006, and commenced November 20, 2007.

The entire project was, however, stalled and re-appraised before work recommenced after the government of Senator Ifeanyi Okowa coughed up N8 billion out of N9 billion owed the contractor.

Shortly after the assessment of the ongoing work on Monday, elated Ogiame Atuwatse III lauded Governor Okowa for paying the said amount to rekindle hope in the completion of the project.

Ogiame Atuwatse, after joyfully inspecting the project and communities, expressed satisfaction with the quantum of work so far accomplished.

He further commended the state government, the contractor and the host communities for lending their maximum support to the contractor.

“I want to thank the governor for his kind disposition towards us; we all know the existing economic situation.

‘For the governor to pay N8 billion out of the money owed, is commendable,” the youthful Ogiame enthused.

The 21st Olu of Warri, during the inspection, trekked the 159 metres length linking Orugbo community to feel the pulse of his subjects.

He was accorded royal greetings and ecstatic cheers from community folks amid pomp and cultural artistry while he urged them to keep supporting the contractor.

Meanwhile, the Special Project Director, Trans-Warri Ode-Itsekiri Bridges and Access Roads, Chief Adams Otimeyin, thanked the Olu of Warri for his infectious and uncommon leadership style as shown in his personal visit to the project site.

Otimeyin, who also thanked Okowa for being a man of his words, put the total percentage of work done at about 73.7.

Area manager of Setraco, Engr. Jose Cosme, who lauded the peaceful disposition of the host communities, extended gratitude to the Olu of Warri, adding that with adequate funding, the project would be completed before Olu’s first coronation anniversary on August 21, 2022.