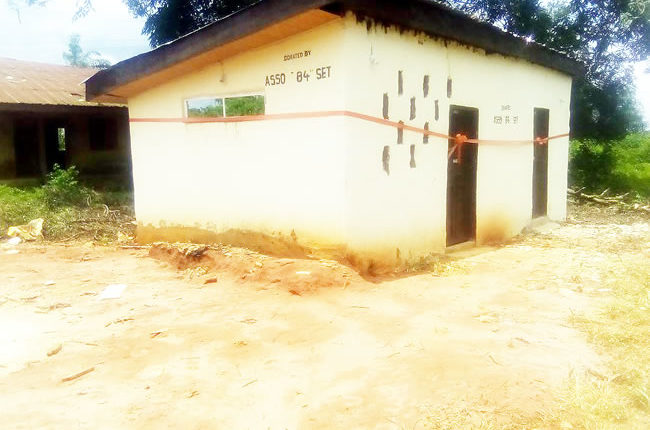 After years of defecating in the bush, relief has finally  come to the   teachers and students of Adaigbo Secondary School in Ogwashi Uku, the  headquarters of Aniocha South Local Government Area of Delta State as the  old  students of the   1984- set   inaugurated a block of four modern toilet facilities in the college.

To ensure regular functioning of the facilities in an environment where water is not  common, especially  during  the dry season, the old boys also inaugurated a generating set,  pumping machine as well as   water tank mounted on a deep well to ensure regular water supply in the college.

“With this, the now  co-educational institution established in 1962, can breathe a sigh of relief,  considering the pains   teachers as well as   students  went through   over the years,” the Principal, Mrs Augusta Osunde, said.

“Before coming to school, everybody has to prepare  as far as toileting is concerned. You can see the school is off the town. So, when  you are  pressed,  you  either go to the bush or take time to go home to defecate.

“This school is a centre for different public  examinations  such as  primary six common entrance, where parents  and guardians will be present and in most cases, we  hardly help them when  they ask for assistance  on toilet facility,”  Osunde said.

She commended the  ‘84-set  Old Boys of the school for  the  project, recalling that another set handed over a block of classrooms and chairs to the school  recently.

Handing over the toilet facilities which were dedicated by a Catholic priest, Reverend Father Franklyn Oraegbu of  the  Holy Family Parish, Ogwashi Uku, to the management of the school,  a member of Adaigbo Secondary School Old Boys Association, ‘84- set,  Pastor Jude Elue, said the project was a dream come through after 37 years of leaving the  college.

He  gave credence to  technology,  saying it was through WhatsApp that the idea of the association was muted  before   other things started to happen.

“This toilet project is our little contribution to humanity, having  learnt about the problems faced   by  the  teachers and students   for many years. We appeal to other old  students   to look inward  and see what they can do for the institution.

“We are proud to have in our set professors, medical doctors, engineers, members of the National Assembly,   lawyers, businessmen, businesswomen,  clerics  and civil servants, among other professionals  in the country  and in the  diaspora,” he added.

Earlier,  Reverend Father Oraegbu, had commended the  initiative of the old  students in coming to the aid of the  school,  adding  that the facilities would be properly  used.

Nigerian Tribune reported that  students who  commenced  academic activities on Monday after the long vacation,  were  happy  to see the toilet facilities, as  they   lauded the old students for the laudable project.

‘Every day, you look around and you can’t find any Igbo among Service Chiefs, is it good?’