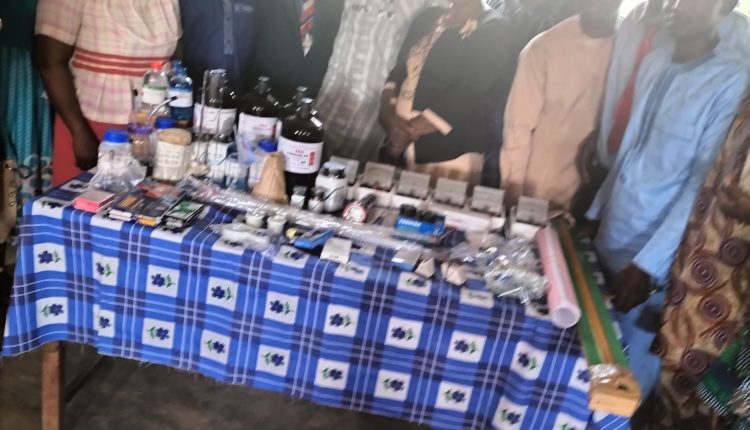 Old Students Association of Gbongan High School in Osun State on Wednesday donated science laboratory equipment worth N300,000 to the school to enhance the efficiency and performance of science students in the learning environment for the forthcoming and consequent examinations ahead of them.

Speaking on behalf of the Old students association while donating the equipment at the main hall of the school, the Chairman, Board of Trustees (BOT) of the school, Mr Aderemi Lewis Oyedele, explained that the provision of the science experimental tools was made available for students to develop the valuable skills that would help them to be well versed in advanced science laboratory equipment.

The BOT Chairman expressed optimism that with the laboratory equipment, the school would be able to outsmart other sister secondary schools in the country and charged the school pupils to be curious more to move from unknown to known and from known to unknown to broaden their knowledge in their studies.

He also maintained that the association would do all it could to ensure that, students are well productive in their areas of studies to produce the best out of them in the forthcoming W ASC examination.

Mr Aderemi who stressed that the association would forge ahead to ensure that, the three educational domains of the students are developed through a thorough impartation of knowledge from instructors, said all necessary arrangements had been made to make them classical and outstanding in their chosen careers.

The Chairman of the Board of Trustees further maintained that, since education is a harmonious training of physical mental and social capability of every individual and assured that the association would increase its tempo to add values to the academic pursuit of students in the school.

He however charged students of the school to be more committed and dedicated to their studies to be outstandingly fulfilled in life and at the same time impact the lives of humans and their immediate environments.

In his own remark, the Director-General, Board of Directors, Mr Adekunle Adedeji, stated that the association appreciates the importance of education which is the bedrock of greatness and appealed to students of the school to be vigorous and rigorous in all their engagements.

The Director General who was ably represented by his Deputy, Mr Alli Quadir pointed out that knowledge is power and ignorance is vice and emphasized that all hands would be on deck to ensure the students are not half-baked but have all-round education that would distinguish them among their peers in the society.

He however appealed to students to be more serious and shun every untoward act that could draw them back from concentrating on their studies.

In her own speech, the Tutor-General of Education in Osun West Senatorial District, Mrs Amosa Moradeke thanked the BOT chairman and other members of the association for their empathy for the students and prayed to God to water their sources of blessings more.

She, however, called on parents to also guide their children to the way of God to be able to be valuable to them, to themselves and to the entire world.

Mrs Amosa who frowned at some lazy students towards learning despite all available facilities that could aid their educational advancement earned them against leaving certainty of life for uncertainty.

The Tutor-General who maintained that punctuality is the sole of business appealed to them to do proper things at the appropriate time so as not to miss it all in life.

While receiving the laboratory equipment from the Tutor-General whom the association handed it over to the principal of the school, Mrs Oluwatoyin Farotimi appreciated the efforts of the association for deeming it fit to irrigate and transform the lives of the students.

She prayed to God to always supply their needs according to His riches in glory and at the same time charged students to be more focused on their studies.