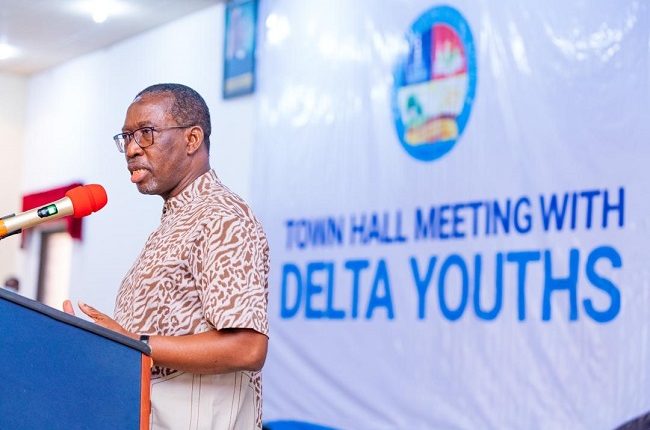 Governor Ifeanyi Okowa of Delta on Tuesday said his administration took the empowerment of youths seriously because engagement of the youths would engender peace in the state.

Okowa stated this in Asaba during the inauguration of projects executed by Oshimili South Local Government Council.

The governor expressed satisfaction with the projects, acknowledging that they were built amid low finances of the council.

He commended the Chairman of the council, Comrade Uche Osadebe, for his prudence and foresight in the management of the council and the area.

He stated that his administration was doing a lot in skill acquisition because he believes that no amount of projects will bring peace to the communities if the youths and women were not gainfully engaged.

“I am excited with what I saw here because I know there is a paucity of funds within the local government council.

“I am also glad that you are engaging our youths to ensure that more youths are able to use their brains to work and earn a living for themselves.

“The more youths we engage, the more skills they acquire and the more peace we are likely to have but more importantly, the more productive youths we will have in the state.

“I thank you for ensuring the beautification of the Council gate and for completing the Council skill acquisition centre which will enable us to train not just the youths but our women also,” he said.

He appreciated Asaba youths for their conduct during the #ENDSARS protests, especially in chasing away the hoodlums that tried to hijack the protest.

Okowa assured that the State Government would support the families of the two youths who lost their lives while defending Asaba from being vandalised by the hoodlums.

He pledged that his administration would construct the road leading to the council secretariat in 2021.

Earlier in his welcome address, the Chairman of the council, Osadebe, had said that the council under his watch, provided employment for the youths through its strategic revenue generation drive.
“We took hard decisions to cut costs and the outcome is the projects we are inaugurating today.
“My administration also embarked on the expansion of primary health care facilities in the local Government, sustained routine monthly environmental sanitation, re-modelling of the Council Secretariat gate with solar security lights among others,” Osadebe said.