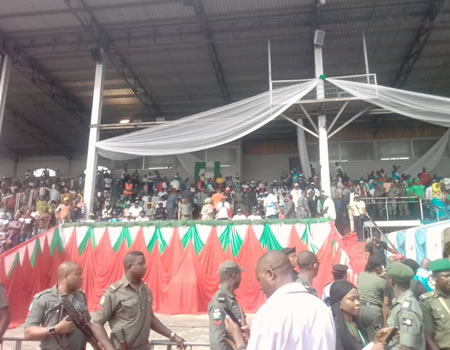 Share
As the campaign of the People’s Democratic Party (PDP) hots up in Delta State, Gov. Ifeanyi Okowa, on Wednesday, disclosed that he has provided N3.5 billion for work resumption on the abandoned Trans Warri-Ode Itsekiri road.
Okowa disclosed this at the PDP campaign rallies held in Warri Township Stadium in Warri South Local Government Area of the state.
He said the aim of revitalising the hitherto abandoned all-important road was to further boost economic activities in the oil-rich region.
The governor, while addressing the mammoth crowd, said the 3-kilometre multi-billion Naira project was abandoned by the contractor, Setraco Construction Company because the previous administrations owed it N8.8 billion.
“I have mobilised the contractor handling the abandoned Trans Warri-Ode Itsekiri road with N3.5 billion to resume work on the road project.
“The project was abandoned because the company was owed about N8.8 billion,” he said.
Okowa assured the people that his administration was committed to addressing the perennial flooding in Warri and its environs.
He urged the electorates to vote en-masse for all the PDP candidates in the state and Alhaji Atiku Abubakar as president.
The governor said his re-election would enable him to consolidate on his achievements, adding that he had constructed a lot of roads and other infrastructure in Warri.
“I want you people to vote massively for the PDP candidates in Delta and Alhaji Atiku Abubakar as president.
“We have appointed consultants on the flood situation in Warri and environ and they have submitted their preliminary report.

“Very soon, work will commence on the project,” he disclosed.
Okowa commended the people on the peace that had returned to Warri, urging them to sustain it to attract more investments and development.
He also advised the people to embark on a house-to-house campaign to woo more electorates for PDP candidates but warned them to be wary of other political parties that may come and deceive them with vague promises.
On his part, the deputy governor, Kingsley Otuaro, urged the people to turn out and vote enmasse for the PDP.
Mr Kingsley Esiso, the PDP chairman in Delta also urged the electorates to vote for PDP at all levels to free themselves from the shackles of poverty.
The Director-General, Delta PDP Campaign Organisation, Mr Solomon Funkekeme, enjoined the people to replicate the massive turnout on election days and vote for the PDP.
The campaign train thereafter proceeded to Uvwie and Okpe Local Government Areas where the governor solicited their votes and promised to consolidate on his achievements
The campaigned was flagged-off on Jan. 4, 2019 in Oghara, the country home of James Ibori, former Delta governor.