Okowa harps on fairness, justice, as he presents staff of office to new idjerhe monarch 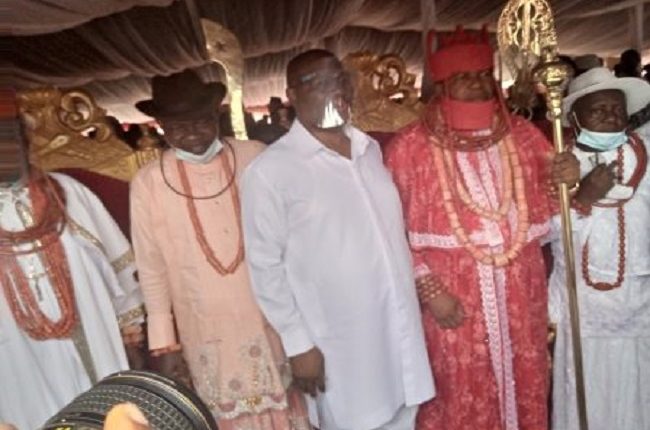 The Staff Of Office was presented to the journalist-turned monarch in a colourful ceremony held at the Idjerhe Grammar School, Jesse amid pomp.

Gov Okowa, who was represented by his deputy, Deacon Kingsley Otuaro, acknowledged that the institution of the Ovie is great significance to the people of Idjerhe.

He, therefore, urged them to strive to promote the integrity of the stool by according full respect to His Royal Majesty, which he truly deserves.

“I urge you all to give him your fullest support and cooperation. The Ovie is one of you, I therefore, call on every son and daughter of Idjerhe to bury any differences and work together with the Ovie for the sustainable peace and progress of the kingdom, Ethiope West Local Government Area and indeed the state,” he added.

Okowa, however, appealed to the new traditional ruler to be kind and fair in dealing with his people.

“I appeal to you to discharge all your responsibilities by being fair and just. You are the father of all your subjects, so you should be fair to all and sundry.

“As the custodian of the tradition of your people, it is important that you uphold the sanctity of their customs.

“I sincerely appeal to you to imbibe the democratic virtues of dialogue and consultation in all your dealings with the people, so as to carry all your people along,” he enthused.

Earlier in his speech read by Hon. Halims Agodo, HRM Obukowho Whiskey, who appreciated Gov Okowa for the numerous appointments given to Idjerhe sons and daughters, stated that the Idjerhe kingdom needs more developmental projects especially a higher institution of learning, a cottage hospital and a skill acquisition centre where youths can learn and be trained on vocations.

In response, Gov Okowa assures the traditional ruler that all his requests would be channelled to the appropriate agencies of government for the necessary attention.

Jesse kingdom came to limelight albeit negatively during the horrendous pipeline fire disaster that claimed over 1,000 lives on October 17, 1998.

HRM Obokuwho Arthur Monday Whiskey, Udurhie 1, also appealed to the Federal Government to, as a mark of respect and in remembrance of the Jesse Fire Disaster of October 17, 1998, to establish a specialized, research and degree-awarding institution in the kingdom.

The new traditional ruler succeeded His Royal Majesty, Edward Igho Otadaferua, Erhiekevwe 1, who joined his ancestors in 2018 after over a decade reign.

Dignitaries present at the ceremony included the Executive Director of Finance and Administration of DESOPADEC, Hon. Chief John Nani, former House of Reps member, Hon. (Chief) Halims Agoda, traditional rulers from other parts of the state, members of the Nigeria Union of Journalists (NUJ), the primary constituency of the monarch among others.

Equities investors gain N42.3bn as index appreciates by 0.3 per cent