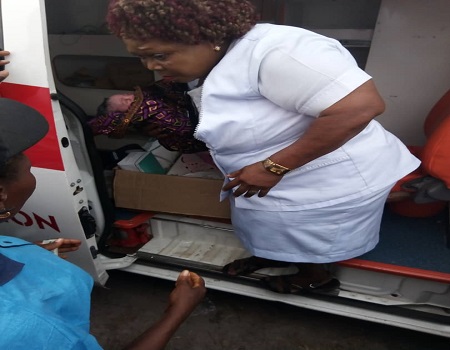 A Woman, Odiri Benjamin, on Tuesday, was delivered of a baby girl at the campaign ground of the Peoples Democratic Party (PDP) at Isiokolo, Ethiope East Local Government Area of Delta State.

The delivery was carried out by the medical team of the PDP campaign organisation at the Council Pavillion of the local government at Isiokolo.

She’s said to be a member of the PDP from Ward 10, Unit 7 in Isokolo, headquarters of Ethiope East.

The baby girl came at about 12:00 noon on Tuesday at the peak of the rally after it was announced to the joy of party faithful and the mammoth crowd that a woman has been delivered of a baby girl.

An announcement had earlier rented the air to the chagrin of the crowd that the attention of the medical team at the campaign ground was urgently needed.

The mother and the child, speculated would be named after Governor Ifeanyi Okowa and his wife, Dame Edith, were swiftly ferried to a nearby hospital for further medical attention.

Speaking at the rally, excited Senator Okowa announced the donation of N2 million to the baby and its parents which drew a loud ovation from the crowd.

He described the safe delivery of the baby as a sign from God and of victory for all PDP candidates both at the state and national levels.

“It’s a sign from God that victory is ours. That sign is a sign of victory for Evans Iwurie, Ben Ibakpa, Evelyn Oboro, Okowa and Atiku Abubakar and other PDP candidates,” Okowa enthused.

He assured the electorate at Ethiope East of more dividends of good governance during his second term in office.

Earlier, chairman of PDP in the state, Chief Kingsley Esiso, hailed people of Ethiope East for their steadfastness and support for the party all the years.

Director General of the PDP Campaign Organisation, Mr Solomon Funkekeme, urged electorate at Ethiope East to cast their votes for PDP candidates en mass and wait to defend their votes.

The PDP campaign train later headed for Otor-Jeremi in Ughelli South Local Government Area where a mammoth crowd, including school children, gathered amid a heavy downpour.