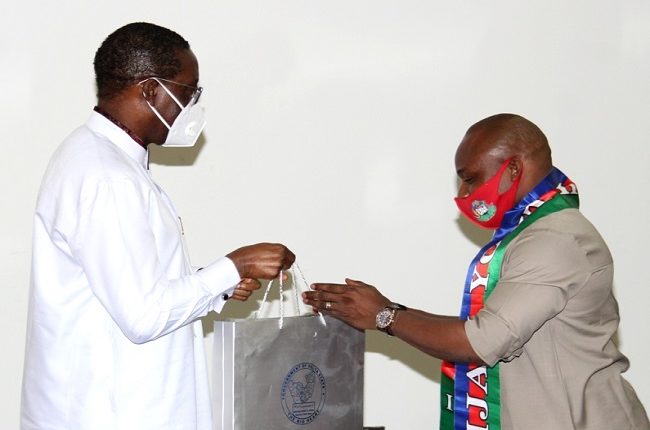 The ongoing Ayokoromo bridge project in Delta creek would be completed before the expiration of the present administration, Gov Ifeanyi Okowa has assured.

Receiving the newly-elected executive committee members of Ijaw National Council ( IYC )at the Government House, Asaba on Friday, Okowa maintained that he would continue to bring the needed infrastructural projects to Ijaw area of the state to consolidate the tempo of sustainable development in the state.

The leadership of the council had lauded Okowa for linking all communities in Delta, especially Ijaw areas, with good roads and bridges even as it appealed to him to ensure the completion of Ayokoromor bridge, a landmark project in the Ijaw nation.

While saying that the facelift being recorded in Oporoza, Ogulaha and other towns of Ijawland within the state was part of measures aimed at addressing basic challenges, he sued for sustained support of the people so as to stimulate consistent growth of the state.

On the crisis in Diebri community in Warri South-West Local Government Area, the governor said: “Government will take some decisions and see what can be done.”

He disclosed that efforts were being made by the South-South governors to give flesh to the proposed regional security outfit as well as the full reactivation of the BRACED Commission for the overall good of the people of the region.

He stressed the need for Nigerians to nurture democratic principles as it had no viable alternative in nation-building.

Okowa said that his administration would continue to collaborate with persons and groups genuinely interested in the empowerment of youths, and urged youths in the state to leverage on the various entrepreneurial development initiatives of the state government to be economically independent.

He urged the leadership of the Ijaw Youth Council (IYC) to partner governors and stakeholders in the South-South to fast-track transformation of the region, especially in peace and development.

He congratulated the new executives of the council on their successful election, and assured that he would work with them in stimulating human capital development for the people of Ijaw extraction of the state and other Deltans.

Earlier, the President of IYC, Comrade Peter Igbifa, had said that the executive committee members were in Government House not only to thank the governor for providing a level-playing ground for all candidates to participate in the council’s recent election, but for also not imposing candidates on the electorates during the election that held at Oporoza in Delta.

FG Spends N1.57trn On Debt Servicing, N1.61trn On Personnel, Pension
THE Federal Government on Thursday disclosed that it had expended N1.57 trillion on debt servicing and N1.61 trillion on personnel and pensions in the current year.  The Minister of Finance, Budget and National Planning, Mrs Zainab Ahmed, made the statement on debt servicing and others expenses during the presentation of the  2021-2023 Medium-term Expenditure Framework (MTEF) and Fiscal  Strategy Paper…Ayakoromo bridge

WhatsApp Business: An App Grossly Underused
WhatsApp Business is an app designed for small businesses to easily stay in touch with their customers and reach out to potential customers. It provides vital business tools that allow you to create a business profile, create a catalog, and do many other things…Ayakoromo bridge

818 Million Children Worldwide Risk Contracting COVID-19 — UNICEF
THE United Nations Children’s Fund (UNICEF) says 818 million children worldwide are at risk of getting infected with COVID-19 and other infectious illnesses. UNICEF’s Associate Director, Data and Analytics Division, Planning and Monitoring, Mr Mark Hereward, made this known in a statement on Thursday and obtained by …Ayakoromo bridge

Stop Denying Us Weapons To Fight Terrorism, FG Tells World Powers
THE Federal Government has appealed to the world powers not to be weighed by unsubstantiated arguments to deny  Nigeria vital platforms and weapons to fight terrorism. The Minister of Information and Culture, Alhaji Lai Mohammed, made the appeal on Thursday when he featured on the…Ayakoromo bridge

NJC approves appointment of 4 Justices for Supreme Court, recommends 3 Heads of Court, others