Agriculture
By Abiodun Jimoh-Benin-City On Mar 20, 2018 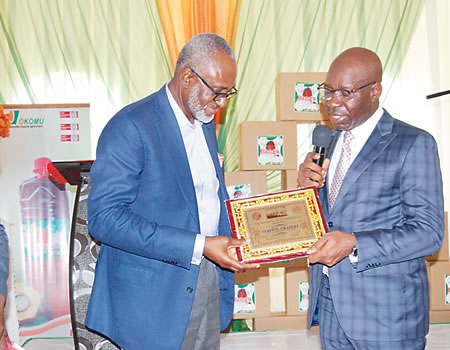 The company Chairman, Gbenga Oyebode, made this revelation at the official commissioning of the plantation last week in Benin City. He stated that at the inception, the pilot project covered a surveyed area of 15, 580 hectares of forest reserve, but by the year 1989, 5, 055 hectares of the estate had been planted and other critical infrastructure such as staff quarters, schools and clinics were built.

Responding to government’s change policy from a solely crude oil based economy to an agro-based economy, the company in 2014 further expanded its operations which culminated in the acquisition of 11, 416 hectares of land in the Ovia North East and Uhunmwonde local government areas respectively, including 660 hectares of cultivated oil palm.”

This new plantation, referred to as Extension 2 is what is being officially commissioned by the Executive Governor of Edo State, Godwin Obaseki, currently, the company operates on two 30 t/hr oil mills and has commenced the building of another two 30 t/hr oil mills which will be commissioned from 2020 on Extension 2. With all these facts, the Okomu oil palm company has lived up to its slogan “With nothing, we can do nothing, but with little, we can achieve plenty’

In the same vein, the managing director, Dr, Graham Hefer acknowledged the board and shareholders who without their ongoing vision, commitment and support especially financially, but also in other facets contributed to the development of the company. “Extension 2 would not have seem the light of the day. These are investors that for more than 27 years now have been backbone of plantation in our proud state. Investors that indeed need to be further encouraged, nurtured and congratulated for walking the walk and not like many others before or after them, just talking the talk.” He noted.

‘Nigeria can save N800bn from cassava production’

HP commits to zero deforestation by 2020