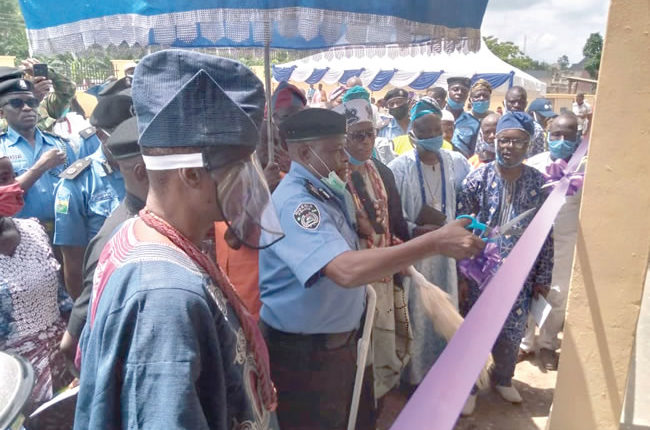 As part of efforts to assist the Ondo State government and security agencies in providing watertight security in the state and especially in the Okeigbo community of Ile Oluji/ Okeigbo Local Government Area of the state, the people of the ancient community have donated a newly constructed divisional police facility to the Nigeria Police Force.

The facility which was handed over to the state police commissioner, Bolaji Salami, by the traditional ruler of Okeigbo, Oba Lawrence Oluwole Babajide, was inaugurated by the people of the community.

Speaking while handing over the facility to the state command, Oba Babajide said the initiative grew out of the desire to provide adequate security for the people of the community and to end the frequent clashes between farmers and herders in the area.

Oba Babajide noted that “security issue should be everyone’s business; we cannot witness development in an atmosphere that is not peaceful and this is one of the reasons we joined hands in this community to build this police station.

“We collectively agreed to fund the project on the premise that when there is security in our community, peace will reign, development will spring up and the well-being of my people will also improve. With the establishment and inauguration of this facility, it will help to create a synergy between the police and the people of the community who can always identify strange faces and movement in the community.”

While inaugurating the new police station, the Ondo State Commissioner of Police, Salami, commended the efforts of the people of the community, just as he charged men of the Nigeria Police to always respect human rights in their operations.

He noted that the advent of social media has been helping citizens of every community to monitor and report activities of security operatives in their domains, just as he urged the police to always be upright in their dealings with the people of the area.

While thanking the people of Okeigbo community for assisting the agency in providing adequate security in the area, the police chief said the facility would help his men to show more commitment towards maintaining law and order in the area while reducing crime rate.

Salami assured the people of the community that the command would make the best use of the facility and would not let the community down. He described the police station as one of the best in the state, furnished with modern facilities

He appealed to the community to cooperate with the force in fighting crime and criminality by giving useful information that would assist the command in its intelligence gathering. He said Ondo remains one of the most peaceful states in the region but warned criminals to either leave the state, turn a new leaf or face the full wrath of the law.

He commended the effort of the community towards enhancing security in the area, saying men of the state police command are ready to collaborate with the people to ensure safety of lives and property.

He advised politicians to eschew violence, political vendetta, character assassination and bloodshed in their quest and aspiration for political offices as the state is heading towards conducting a governorship election.

A resident of the community, Mr. Jacob Ayodeji, expressed confidence that the community would witness unprecedented peace, saying peace is synonymous with development.

“This town has been witnessing developments in all areas since the installation of Oba Babajide as the Oluoke of Okeigbo. He has been relating with our sons and daughters in the diaspora on how to turn around this town.

“This is one of the best things that have happened to Okeigbo in recent years; the people now speak with one voice and this will surely bring in more development. We all need to support our traditional ruler on his vision for this ancient town of Okeigbo,” he said.