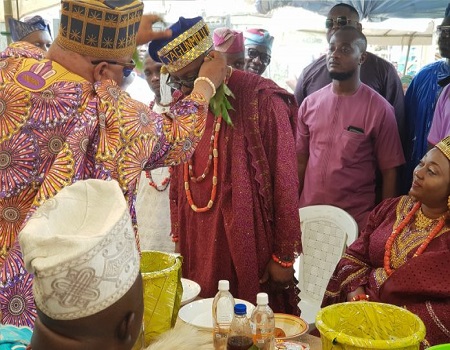 A Community in the isolo area of Lagos state, Oke Ogbere has installed Chief Folorunsho Ajayi as the new Aare Jagunmolu of Oke Ogbere land.

His Royal Highness, Osolo of Isolo, Alhaji Sheikh Abdulkabir Akolawole Agbabiaka, who is also the Secretary of Lagos State Council of Obas and Chiefs carried out all the necessary rites confirming the newly installed title.

While speaking after the installation held over the weekend in Lagos, Chief Folorunsho debunked the widespread belief that chieftaincy titles are rituals.

He narrated how his perception about the chieftaincy concept was tweaked due to a close watch of his wife, who was also installed year before as Yeye Meso of Oke Ogbere land.

Ajayi stated that he used to see it as a fetish thing that a Christian should not embrace, owing to the possible ritualistic trappings but seeing his wife getting better even after the installation encouraged him when the idea was posed.

“The title means a lot to me, this is the first time I have received such honour, I do appreciate it and it is just okay for me.

“Absolutely I cannot leave my wife out of this, Chief Mrs Lucy Omosefe Ajayi because she has been given a title before in the same place, probably they felt that it is also important to bestow this on me.

“As I was told and informed that it is an honorary chieftaincy title so I just felt it is something to honour me and not way out of my belief as a Christian.

“I think I am convinced, I also encourage others to embrace it, it is not fetish as they, myself and my parents believed.

“After I was installed as Yeye Meso of Oke Ogbere land and most recently Yeye Oge of Ado kingdom, I followed her closely and knew there was really nothing fetish about it, it’s just honorary and no big deal pertaining to rituals.

“The title in itself depicts a warrior, a fighter, it is just by being steadfast in whatever you are doing, how you are going to approach things, you need to be dogged,” Ajayi said.

Meanwhile, The new chief noted that whenever duty calls for the course of Oke Ogbere land and Isolo kingdom, he will not hesitate to offer his best.

“I would give my best wherever they need help from me. if I am called upon, I will definitely render what I can do for them” Ajayi said.

Speaking earlier, The Baale of Oke Ogbere land, Alhaji Tajudeen Orilowo noted that the installation was in commemoration of the annual celebration of Oke Ogbere day.