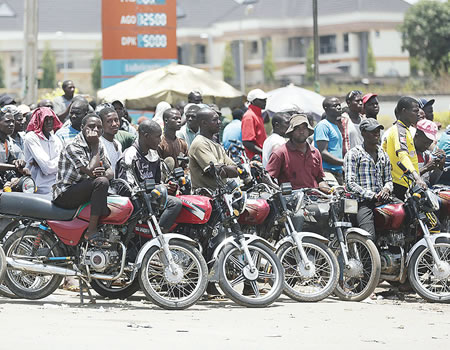 The Chairman Caretaker Committee on Transportation in Ogun State, Barrister Femi Adeniyi, has said that the ban on operations of motorcyclists from some parts of Lagos State, would in no small way boost revenue generation of the State.

Adeniyi stated this while briefing newsmen in Abeokuta, on Monday, that his committee had received calls from members of the public on the influx of motorbike riders into some neighbouring communities close to Lagos.

The Lagos State government had last week placed a ban on operations of motorcyclists plying major areas in six local government areas in the state.

The chairman said the State Government would accommodate displaced motorbike riders who intend to ply their trade in the state.

He explained that the displaced motorbike riders had been noticed in Lagos State neighbouring communities such as Alagbole, Akute, Ajuwon, Ojudu-Berger, Mowe; Ibafo, Ogijo, Sagamu and Ijebu-Ode.

Adeniyi, however, urged them to be law abiding citizens of the state, saying the state would not condone any act of lawlessness from anyone.

He said: “We, as a responsible and responsive government, have been inundated with calls from the general public and we have also listened to the mass media concerning the position of Lagos State on the ban on Okada in Lagos metropolis, consequent upon which commercial motorcyclists have left their place of trade from Lagos down to the neighbouring towns which happened to be in Ogun State.

“The most concerned areas are Alagbole, Akute, Ajuwon, Ojodu Berger, Mowe, Ibafo and Ogijo axis. We have noticed the influx of these Okada, even to Sagamu and Ijebu-Ode, Ota, Sango and other areas.

“We plead with our people to be law-abiding and very accommodating. We are all going to that Promised Land, but we need to tread with caution concerning this influx of the Okada riders. We know that it is going to be a means where the government will generate revenue from the people, especially the Okada riders because they would pay their dues to the government.

“At the same time, we need to let these people understand, that is the Okada riders, who are just coming in, that it would be in very bad taste if they are resisted. For this would be not in consonant with freedom of movement as enshrined in the constitution of the Federal Republic of Nigeria.

“This movement which has been restricted in Lagos State could also be restricted in Ogun State if the agents of darkness amongst them display their talents in Ogun State. Ogun State, as we know, is the Gateway State to the nation, and we have our own standards and we don’t want any Okada riders to take laws into their owns hands or to use this opportunity to be committing crimes.

“We appeal to all of them to work harmoniously with those people they have met on ground and make sure that they work within the ambit of the law. And whosoever crosses his bounds will definitely face the wrath of the law.

“We don’t want anybody not to say that we have not been warned. We are all obedient citizens, but there are some which we don’t know that we are going to tame to size. We have a peaceful Ogun State and we don’t want any influx of vagabonds and layabouts to take advantage of this influx of people down to Ogun State.”