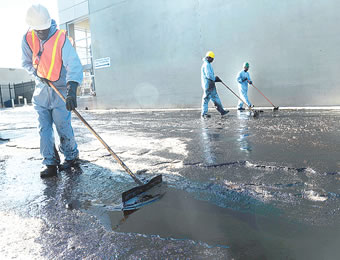 With oil and gas discoveries in Africa, the continent has been described as one of the top hotspots in the industry. With these discoveries come several challenges, which pose as opportunities for entrepreneurs looking to do business in the sector. RUTH OLUROUNBI takes a look at potential business opportunities for African entrepreneurs in the oil and gas sector. Her report

According to PwC’s estimates, of the 132 billion barrels of proven oil reserves, Africa produced nine million barrels of crude oil per day (bbl/d) in 2011, with 81 per cent of this oil production coming from Nigeria, Libya, Algeria, Egypt and Anogola.

Now, experts believe that thanks to significant gas finds in Africa and access to the lucrative Asian LNG market, these pose significant economic benefits for the East African region and could act as catalysts for meaningful economic development in the region. Ghana’s jubilee field, hailed as the fastest ever deepwater development, taking just 24 months from development to production, has also served as indicator to the demonstration of possibilities within Africa, to the world.

These developments, according to PwC, have opened up “many key opportunities within Africa due to: new exploration blocks being opened for competitive bidding, port development and management, pipeline engineering and construction (both subsea and onshore), onshore and offshore maintenance, LNG plant engineering and construction, CO2 reduction and gas-powered electricity generation, other gas monetisation projects for local use (methanol, fertilisers, urea), stability of supply and security of supply with a reduction in exports, foreign exchange inflows (before and after the oil price crisis), distribution of wealth – a benefit for all citizens, infrastructure development mega projects and new refinery development or upgrades.”

Despite these new opportunities, however, African oil and gas industry still faces diverse and numerous challenges, which include insecurity issues and illegal oil bunkering damages, among others. Some of these challenges are stifling growth and development in a number of countries around Africa.

But with investments in the sector, some of these challenges could be overcome.

My mum spurred my interest in entrepreneurship — Zircon boss