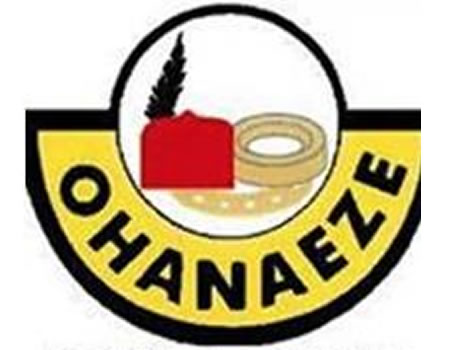 THE Ohanaeze Ndigbo, Enugu State Chapter on Thursday visited the Muslim Community at Ogrute in Igbo-Eze North Local Government Area of the State to commiserate with them on the inferno that gutted their mosque last Saturday.

The State President of the pan-Igbo group, Chief Alex Ogbonna, who led his executive members to the scene, said he was in the area to re-echo the existing peace and bond existing among all the residents of the State irrespective of their religious and ethnic differences.

Chief Ogbonna a one-time member of the Enugu State House of Assembly expressed sadness over the inferno, urging the Muslim faithful to accept the development as an act of God which should not be allowed to affect the existing cordial relationship existing between Christians and Muslims in the State.

“We are here to sympathise with you and to tell you that whatever may be the case, we shall continue to be one.

“You have been here for several years and there has never been any incident of whatever form. So, our appeal is that you all should continue to live in peace. So, the essence of our coming here today is to show solidarity with the Imam and thee Muslim community in this area.

“We have Christians, traditionalists and Muslims in this State and all of them practice their religion unhindered. There is absolute freedom of worship in Enugu State and as such everybody is free to pursue their religion. That’s why we felt touched that this happened to a house of God”, he said.

“We felt that what happened is quite unusual because this is the most peaceful State. The Governor is a peaceful man and that is why in Enugu, everybody sleeps with two eyes closed”, he concluded.