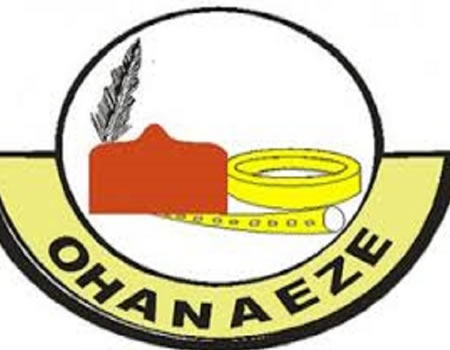 THE Ohanaeze Ndigbo has rejected the planned establishment of 94 ranches in 10 states of Nigeria as a way of finding peace and putting an end to constant clashes between farmers and herdsmen across the country.

Tribune Online reports that the President of the Anambra state chapter of the apex social-cultural Igbo organization, Chief Demian Okeke-Ogene, in an interview with our correspondent on behalf of the group in Awka, the state capital, said the establishment of the ranches was against the law of the land.

The policy, an initiative of the Federal Minister for Agriculture and Rural Development, Chief Audu Ogbeh was aimed at establishing the ventures in all states of the federation.

The President said incessant clashes between herdsmen and farmers in the country could not be curbed through the establishment of ranches policy.

He explained that the policy would in some time in future indicate the transfer of ownership of such lands to cattle herders, rendering same sovereignty within the exclusive control of herdsmen.

He noted that rearing of cattle remained a private venture and not a federal or state government enterprise.

“Such private venture does not fall within the purview of ‘overriding public interest’ as envisaged by the Land Use Act of 2004, section 28.

“The implementation of this policy is not only unlawful but will also lead to several agitations by other private investors for allocation of lands, leading to the total breakdown of law and order,” the leader noted.

Therefore, Ohanaeze Ndigbo, Anambra State chapter urges the South East states, state Assemblies in the region and other concerns institutions to reject in strongest terms the Federal Government planned the establishment of ranches in 10 trouble States for the Fulani herdsmen.

The Igbo group said any attempt to implement the policy will amount to the encroachment of the people’s right to existence and would be vehemently rejected by the Igbo’s extraction.