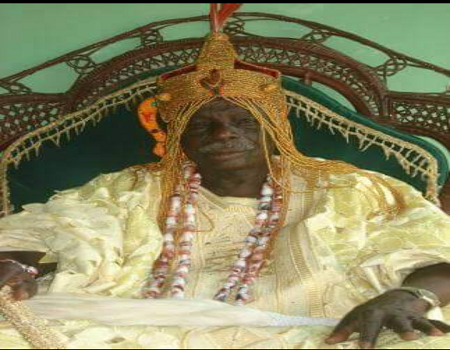 THE ancient city of Modakeke, in Osun State, was thrown into mourning following the demise of the Ogunsua of Modakeke, Oba Francis Olatunji Adedoyin, who joined his ancestors at the age of 96.

Though Tribune Online reliably gathered that the traditional ruler passed on before Tuesday, the official announcement of his passage was delayed till today to observe necessary traditional rites. The monarch was said to have died at Our Lady of Fatima Catholic Hospital, Jaleyemi, Osogbo.

While announcing the death of Ogunsua, the Modakeke Traditional Council in a statement endorsed by Oosa of Modakeke, Chief Oloyede Olasupo Adio, a 7-day mourning has been declared in the town, saying all the trees in the community, situated near Ile-Ife would be felled to indicate the transition of Oba Adedoyin.

ALSO READ: This is how girl, 12, boy, 16, kill selves after playing horrifying game

Reacting to the demise of Oba Adedoyin, the gubernatorial candidate of the African Democratic Congress (ADC), for the September 22 election in Osun State, Alhaji Fatai Akinbade condoled with the people of Modakeke in Ife East Area Office over the demise of the traditional ruler.

He recalled that Ogunsua “lived a fulfilled life, having served his people with all he had”, stressing that “though death is inevitable, and despite the fact that our Kabiyesi lived long, his death nonetheless, is still painful. One’s solace, however, lies in the valued life of worthy contributions he led while alive.”