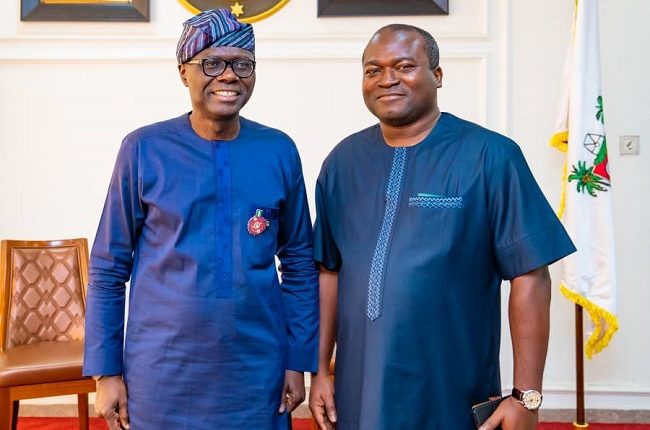 In a congratulatory birthday message, titled “A Heartfelt Birthday Message to an Illustrious Governor”, to Sanwo-Olu, who clocks 55 years old today, Thursday, Ogunsan said the governor has displayed exemplary leadership and selflessness in public service.

“On this red-lettered celebration of your 55th birthday, I write to wish you the best of birthdays and to thank you for your selfless service to our dear state.

“Your birthday reminds of our how lucky we are as Lagosians to have been blessed by God with a goodhearted person for a leader with the best interest of the people at heart. Your effervescence and dexterity in governance remain unparalleled. Thank you for your selflessness and leadership style which means so much to Lagos and Lagosians.

“A graduate of the University of Lagos, London Business School, Lagos Business School and the John F. Kennedy School of Government cannot but make one proud, as your impact is felt in all facets of the state, today.

“Here is a great model and mentor to the younger generation; a fantastic leader whose career path and experience are deeply rooted in banking and public service, having held sway as Managing Director/CEO of the Lagos State Development and Property Corporation (LSDPC) before emerging as the governor.

“Stakeholders in government and even the private sector can attest to your exemplary disposition geared towards creating an enabling environment for businessmen and investors.

“We are delighted to mark this special day with you. You have been an inspiration to us and future generations. Through your thoughtful and visionary administration, predicated on your T.H.E.M.E.S. agenda, you have had a positive impact on all quarters of the state,” he said.

Wishing the governor well as he marks his special day, Ogunsan added, “Today, I join millions of others in Lagos, Nigeria and all over the world to wish you a fabulous birthday. You are a truly someone whose name deserves to be inscribed in gold. You have no idea of the multitudes of lives you touch every minute that passes by. You are a monumental blessing to many of us, as you continue to inspire as you aspire to give your best in all that you do.

“I am fortunate to know someone as extraordinary as you, as my admiration for you is to the high heavens. May you forever keep making giant strides in life. Your success bears testament that life doesn’t bless you with what you wish for, but rather what you work for. I greatly admire your work ethics.

“Having taken up the daunting task of governing a metropolitan state like ours, you have displayed hard work, diligence, resilience and dauntlessness in administration. Thank you for everything you do.

“As a resourceful and relentless team lead, may I bring it to your notice that we recognise your labour of love as we celebrate you and hope for many more years of your stay on earth, for the good of humanity.

“Thanks for being a valuable asset and a huge blessing to humanity. I hope you get to take a short break to celebrate your birthday. May you be graced with many more years filled with sound health, peace and joy.”